Last month, Vodafone has presented the GigaCube for a package of routers and mobile phone rates. The router is the Huawei B528, which is also without Vodafone branding. Only the outer packaging carries the design of the telecommunication service provider. The GigaCube itself has the manufacturer Huawei’s logo and there is no indication of Vodafone. Now we have the opportunity to have closer look at the GigaCube router. 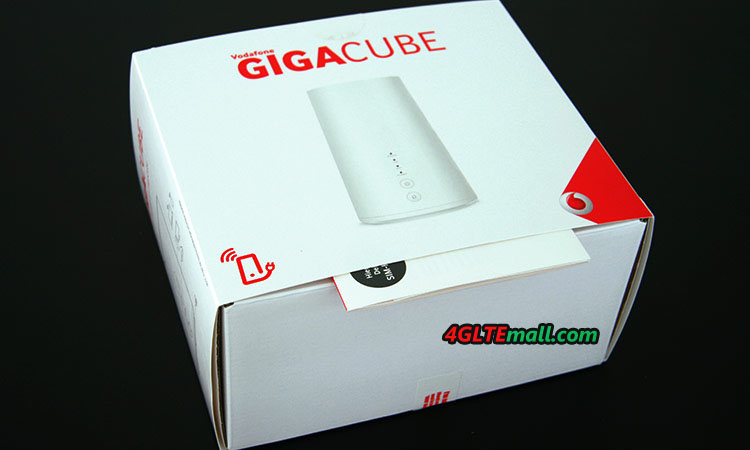 Not suitable for mobile use

The Vodafone GigaCube is 105 x 105 x 181 millimeters in size. The body is not in small size, so you may not take it in hand like Huawei E5787 mobile WiFi hotspots. For this reason alone, the GigaCube is not suitable for mobile use, but it’s cool for the weekend house, the caravan, the hotel room or the apartment. In addition, there is no inserted battery or replacable battery in the Huawei B528 GigaCube. Instead, the unit is powered only by the included power supply. 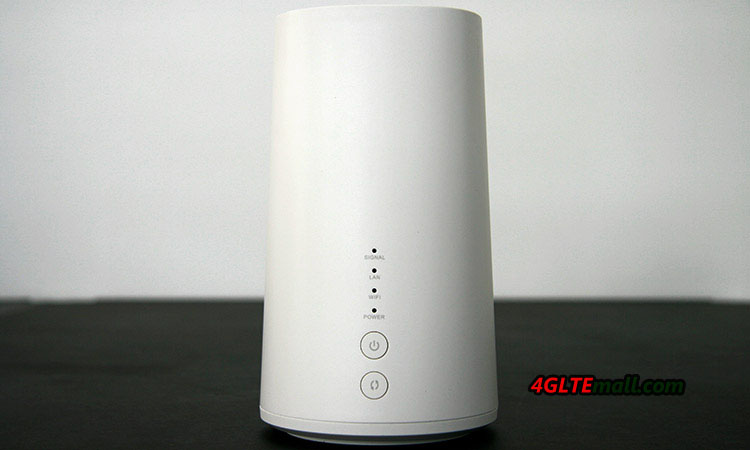 As an alternative to WLAN, a notebook can also be connected to the router via a network cable. Such a cable is included with the GigaCube. The connector is located on the back of the device. There is also the socket with which the power supply is connected to the mobile hotspot. Under one flap there are also jacks, via which external antennas can be connected to the GigaCube. The connection for a VoIP telephone, which is also located on the back of the router, has been deactivated according to Vodafone specifications. We could not test this so far. 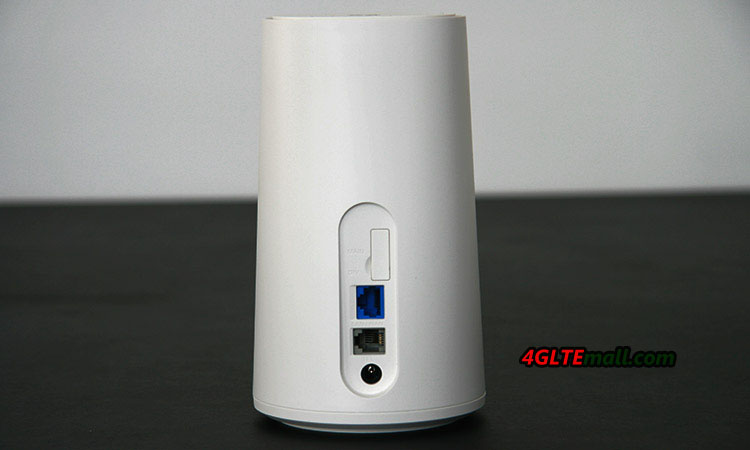 On the front, we can see not only the on/off switch and the WPS button, but also four light-emitting diodes. These indicate whether the B528 GigaCube is powered, whether the WLAN hotspot is available and whether the LAN port is being used. The fourth LED indicates whether the router is connected to the mobile network.

The GigaCube can be configured via a connected computer, a smartphone or a tablet. The Internet address to configure the router is giga.cube, user need enter it in the Internet browser. The default password for the web front-end is located on the bottom of the router. Here is also the SSID and WLAN password specified. In addition, the SIM card (micro SIM format) slot is located on the underside. 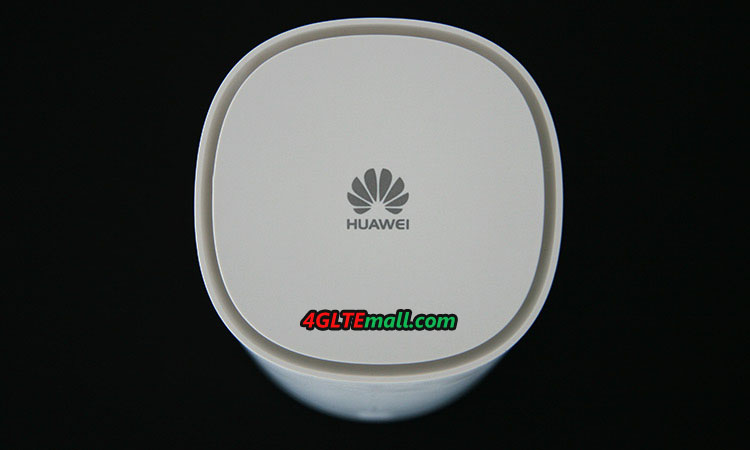 After the SIM card is inserted directly and the GigaCube is switched on, the LED for the mobile radio reception is initially red. Reason: The SIM PIN must be entered via the web-based menu if the PIN search on the SIM card has not been switched off, which is at least partly the case with the operator cards defined for the GigaCube. After this, the initial setting can be made. A personalized SSID can be assigned, which can be connected with a special password. 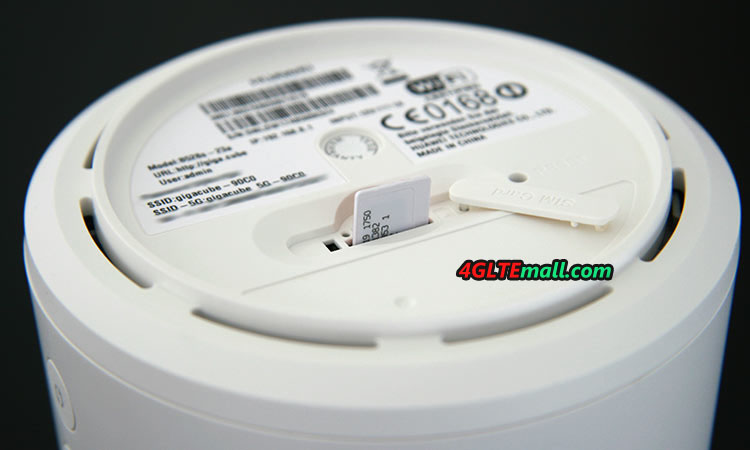 On page 2, you can read about the function in the configuration menu, and to what extent, the GigaCube also allows the use of SIM cards from other networks. During the initial setup, the access data for the router menu can also be adjusted. In addition to own WLAN data for the hotspot on 2.4 GHz, the individualization for 5 GHz is also integrated. The settings can be changed subsequently. Furthermore, the user can decide whether to operate parallel to 2.4 and 5 GHz or only on one of these frequency ranges. In principle, the WLAN function can also be switched off completely if, for example, only a device via a network cable is connected to the router for the Internet access. 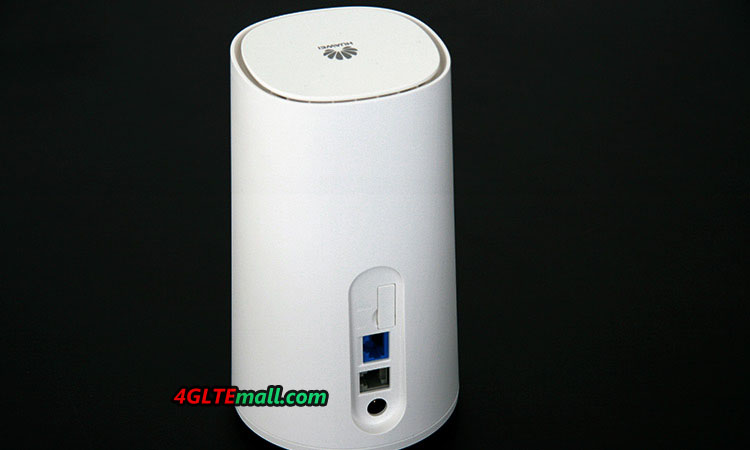 We have also used a SIM card from other network provider such as O2, which has worked smoothly in the GigaCube. Say: The Vodafone GigaCube router was not equipped with a SIM lock or Netlock and it can be used with any operator cards. The access data for foreign networks may not be recognized automatically.

To do this, a new profile must only be created in the Connection Setup – Profile Management menu. 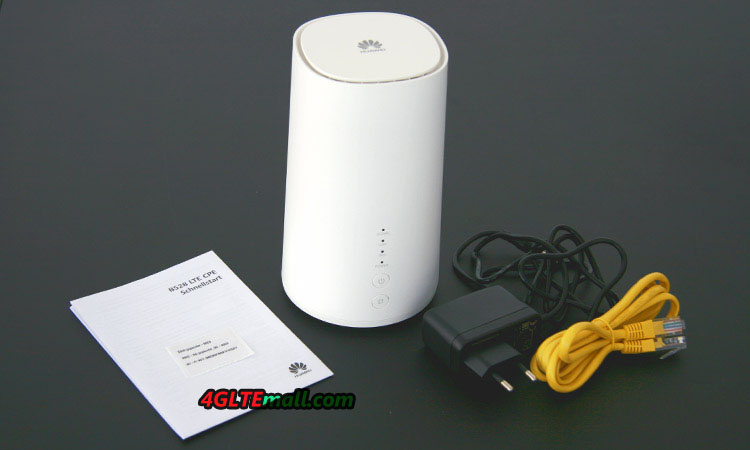 What Interesting is the possibility to set up a VPN directly on the Huawei B528 router. The WLAN channels can be selected manually. These are automatically assigned by default. The user interface is very similar to Huawei’s other mobile hotspots. The WLAN range is significantly higher than the Huawei E5776 mobile hotspot, which we had tested for comparison.

The GigaCube supports speeds of up to 300 MBit/s in the downstream via LTE, especially on the LTE-Advanced networks. Also Internet connections can be established with the router via UMTS/HSPA and GPRS/EDGE. In the first test, the Huawei B528 sold by Vodafone GigaCube left a good impression. The setup is intuitively possible (can be seen from the fact that the access data for the 5 GHz, WLAN area must be adjusted later) and the WiFi range is quite comparable to that of a FRITZ! Box 7490, which we had tested at the same Place. 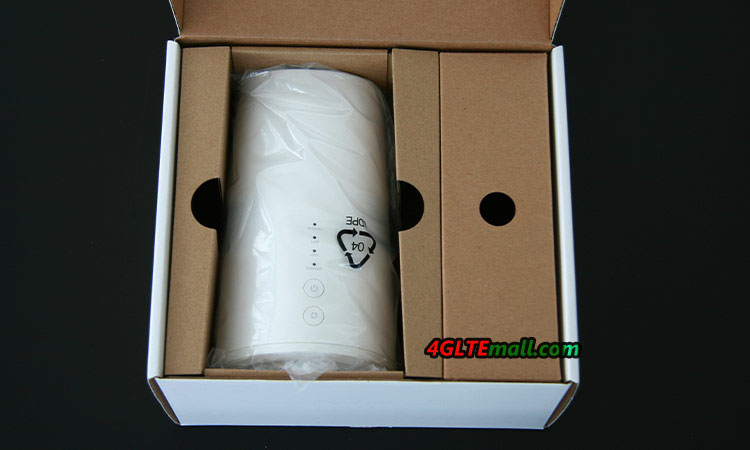 The Vodafone GigaCube could serve as a DSL replacement, but less suitable for the more extensive file exchange and intensive streaming. Exciting is the possibility to use any SIM card. Thus, the Huawei B528 GigaCube can also be bought at the comparatively low price from www.4gltemall.com, for example on a holiday abroad, where the GigaCube tariff is not available, can also be used with a local SIM card. And there is newer model Huawei B618 LTE CPE Cube available now, which supports higher level LTE networks.