A few days ago, TP-Link offers a new LTE router TL-MR6500v which has a special feature of the integrated telephone function including the RJ11 interface for an analog telephone. Telephony can be handled either via the SIM card via VoLTE or via classic VoIP. In the test, the TP-Link TL-MR6500v will show how well the router works in practice.

The TP-Link TL-MR6500v is packed in an unspectacular box. The labeling is almost entirely in English, and the quick start guide provided explains the commissioning very clearly as well. In addition to the 4G LTE WiFi router itself, the packaging also includes a power supply unit and a short LAN cable. Since the router requires a MicroSIM card, TP-Link has even included an adapter from Nano-SIM to Micro-SIM. 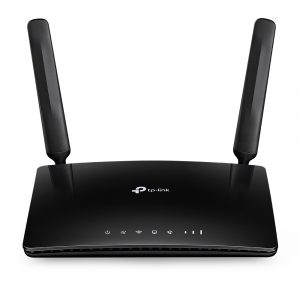 First impression of the MR6500v: for a stationary LTE router, the TP-link 4G WiFi Router is quite small and flat. This may also be due to the fact that the cellular antennas have to be screwed externally to the router and are not integrated into the device, as is the case with most other LTE routers. The advantage of the external antennas, however, is that you can also connect your own 4G LTE antennas if necessary, as these are standardized SMA connections. 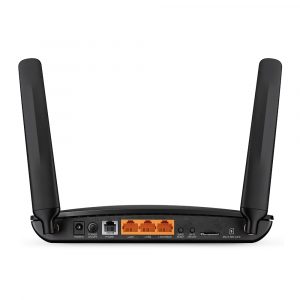 The design of the TP-Link TL-MR6500v is rather unspectacular: There is a glossy black front with some LEDs that indicate the operating status and the reception strength. The underside has plenty of ventilation holes so that no heat can build up. All connections are on the back. There are three RJ45 LAN interfaces, an RJ11 socket, a connection for the power supply unit, a MicroSIM slot and three buttons: Power, WPS / Reset and WLAN On / Off.

TP-Link has installed a comparatively slow LTE Cat4 modem in the TL-MR6500v, which can achieve speeds of up to 150 Mbit/s in the download and up to 50 Mbit/s in the upload. In addition to 4G / LTE, 3G / UMTS is also supported, but the router cannot support 2G/GSM. The following frequency bands can be used:

With this frequency band support, the router can be used well and without problems in Asia, Africa and Europe.

In practice, the LTE modem left a mixed picture. The reception quality is decent, the external stub antennas deliver a good performance even with weak reception. The speeds are well below the values ​​that can be measured at the same location with other end devices. An example: where the Huawei B818 router can download around 300 Mbit/s, the TP-Link TL-MR6500v only delivers around 60 Mbit/s. On the one hand, this is due to the weak WLAN and the LAN, which is limited to 100 Mbit/s, on the other hand, the modem cannot bundle frequency bands (carrier aggregation). This means that the router can only use a small part of the capacity made available by the cellular network. 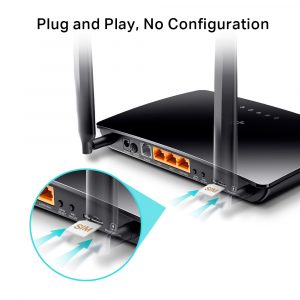 The maximum speed in the test was around 90 Mbit/s in the downlink and just under 50 Mbit/s in the uplink in test LTE network. The latency times were pleasantly low at well under 20 milliseconds. In addition to IPv4, the router also supports IPv6; in the test with a SIM card, addresses from both areas were assigned.

In practice, the low maximum speed of the LTE modem is not a problem for most applications. The TL-MR6500v is perfect for surfing and video streams are no problem either. The device may not be ideally suited for very large downloads or for use with many devices at the same time. 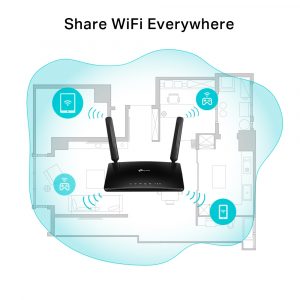 The TP-Link TL-MR6500v has three RJ45 100 Mbit/s LAN connections on the back, of which LAN3 can also be used as a WAN connection if required. Of course, Gigabit LAN would have been nice, but given the low price, the maximum of 100 Mbit/s is still okay.

TP-Link has also made savings in the WLAN with the MR6500v and relies on a radio module that works exclusively in the frequency range around 2.4 GHz. The theoretically maximum possible speed is 300 Mbit/s, but data rates of around 150 Mbit/s were mostly observed in the test.

The WiFi range was completely sufficient for an apartment with about 70 square meters in the test. However, the MR6500v cannot fully supply larger apartments or a single-family house; the use of a WiFi repeater may be advisable here.

TP-Link enables the configuration of a WLAN schedule in the settings of the TL-MR6500v in order to automatically switch the WLAN on and off. The schedule can be individually controlled on a daily basis if desired.

If necessary, a WLAN guest network can also be activated in the web interface. This can be provided with a password and, optionally, access to the local network is also possible.

Telephony via VoLTE or VoIP

The TP-Link TL-MR6500v is one of the very few LTE router models that offer a telephone function in addition to the Internet. If you have an analog phone connected to the RJ11 connection on the back of the router, you can either make calls via the SIM card and be available (Voice over LTE, VoLTE) or you can store special VoIP access data and make calls via a third-party provider.

In the test, both the telephony via the SIM card in the LTE network with VoLTE and via VoIP with Sipgate worked perfectly. The voice quality was good. Sometimes the call setup and the call signaling took significantly longer than on a cell phone, but the fault here is likely to be with the connected DECT phone. By the way: the MR6500v does not offer a DECT function, so cell phones need a suitable external DECT base.

The TP-Link TL-MR6500v offers a good and full-fledged telephone system with many important basic functions. This includes, for example, a simple address book, an answering machine, a “do not disturb” function and the ability to block phone numbers.

The TP-Link TL-MR6500v router can be easily configured via a web interface in the browser. In the test, the display was clearly structured both on a Windows PC and on the iPad and operation was very easy and clear.

The setting options on the MR6500v are quite extensive. In the network or Internet area, for example, not only the network mode (e.g. 4G preferred) can be set, but the frequency band can also be selected. This can be very helpful, especially when used with an external LTE directional antenna.

Further setting options in the Internet area concern, for example, a freely adjustable “data limit” for volume tariffs as well as dynamic DNS or static routing.

In the web interface, the user has the option of sending and receiving SMS. For example, messages can be received from the network operator or, if a corresponding tariff is used, SMS can be sent to top up the prepaid credit.

The TP-Link TL-MR6500v offers an excellent price-performance ratio. If you are looking for an inexpensive LTE router with a telephone function and many setting options, the TL-MR6500v is a very good device. The ability to make calls via VoLTE in the cellular network was particularly popular in the test. The software is also implemented convincingly. There is criticism for the comparatively slow LTE modem as well as the slow LAN and WLAN.