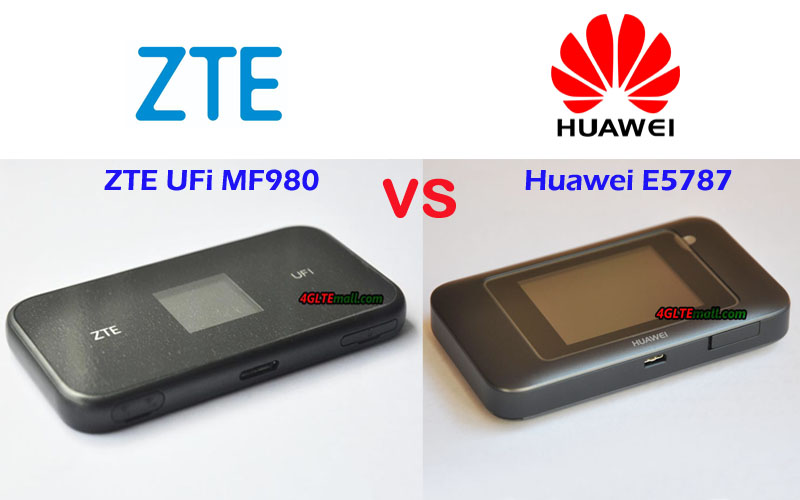 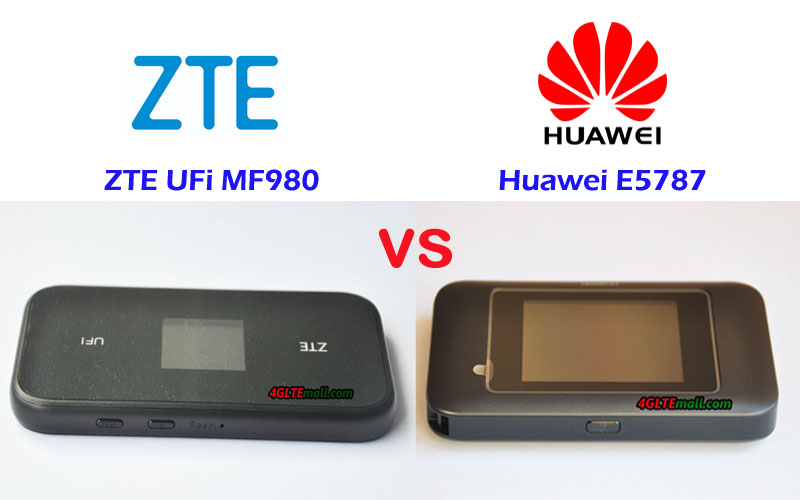 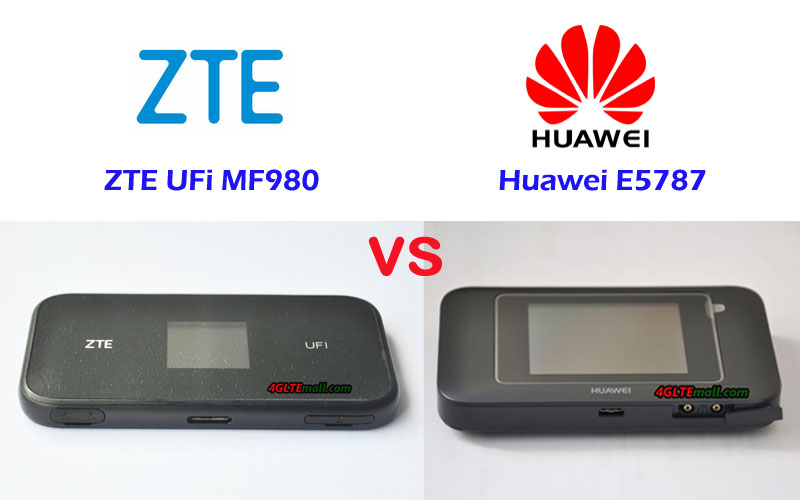 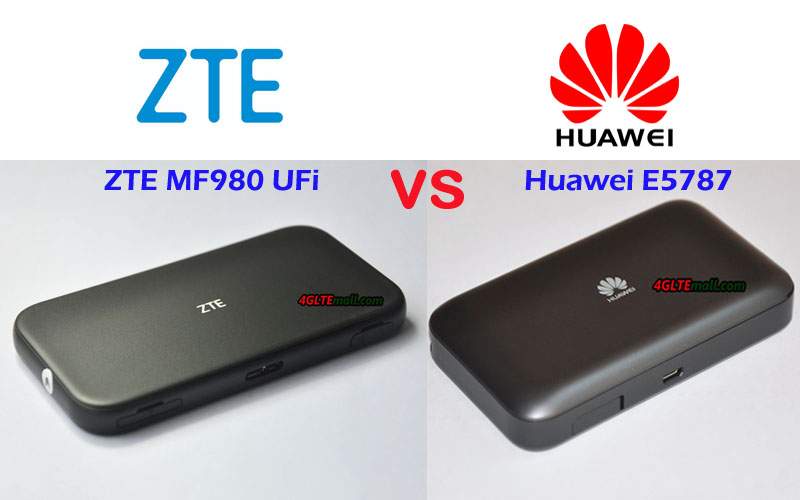 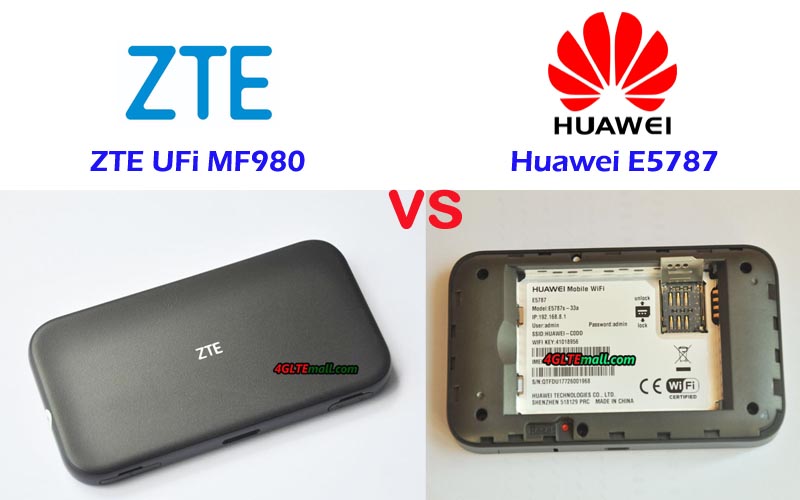 With the LTE network evolving to LTE-Advanced, more and more LTE gadgets are needed to support the advanced network so as to meet the requirements from end-users for faster internet speed. ZTE MF980, also named ZTE UFi MF980, is one of the new gadgets.

We got the ZTE MF980 4G mobile router for a couple of weeks and today we have time to take a test for this new LTE router. It’s in black color but much thinner than current popular models such as Huawei E5786 and Mobile WiFi Pro 2 E5885. 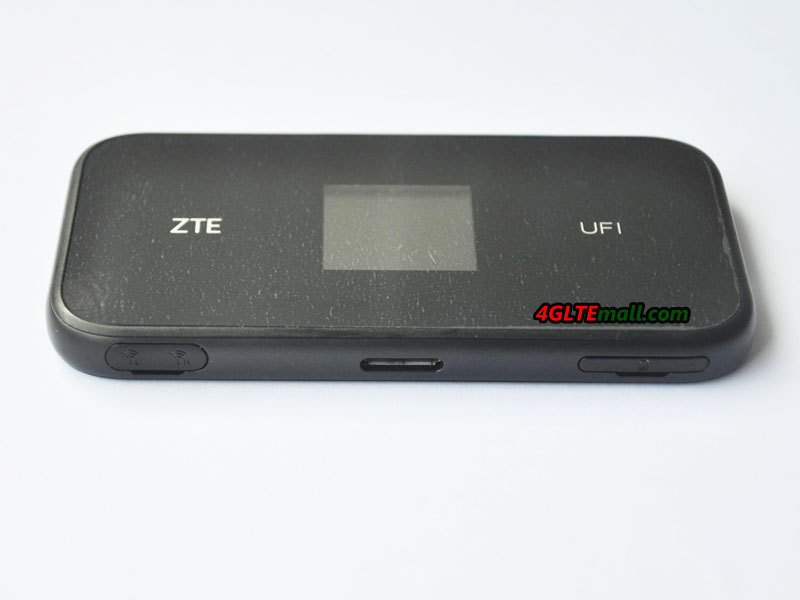 The ZTE MF980 has a 1.44inch screen, but not like the high-end 4G LTE-A mobile hotspots from Netgear such as Aircard 790s and Aircard 810s, it’s not a touch screen. The ZTE and UFi are listed at two sides of the screen. On top edge, the power button and func button are there with a reset hole. At the opposite edge, two connectors for external 4G Antennas are covered by a small cap. The USB3.0 port is at the middle of the edge while the right side is SIM card slot. It uses Micro SIM. On the back of the ZTE UFi, there is only ZTE Logo. The back cover is not tight with the whole body, which makes you think it could be removed, but we tried, the back cover can’t be removed. So the battery is built-in and can’t be changed. 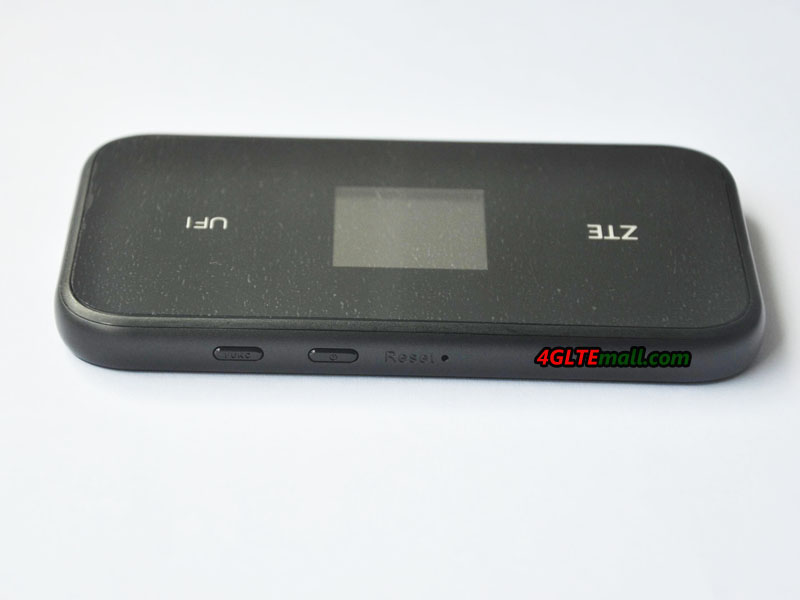 Long press the power button for 3 seconds on the top edge, the ZTE UFi MF980 will start working. The screen will show the signal bars, network provider’s name, users quantity connected from WiFi, battery status and the consumed data. For simple setup, users need to press the FUNC button to switch menu and power button to confirm. 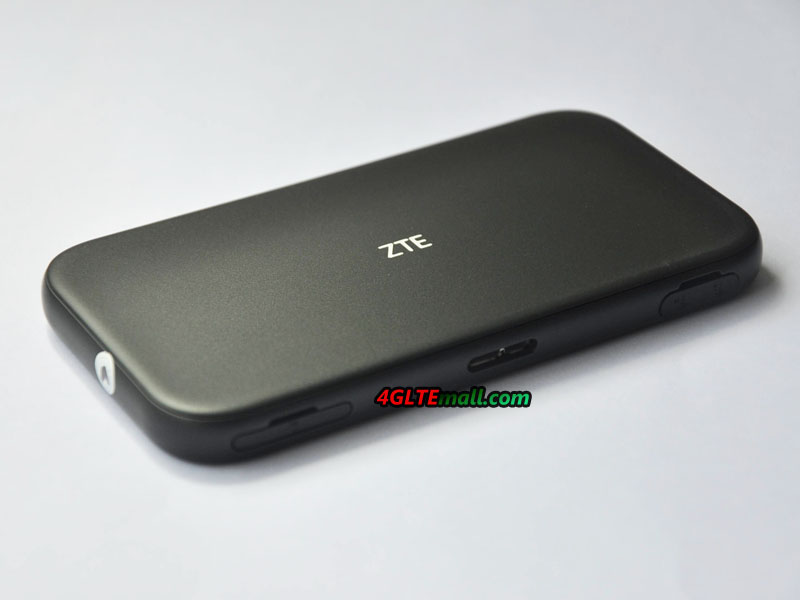 In the simple menu, we can see it includes Data Connection, Device Info, WiFi QR Code, WPS, Global Roaming, Quick Boot. Click FUNC to next and click Power button to OK. Users can click to connect the data, and scan the QR code to connect to the router with the ZTELink APP. No more setup is allowed through the two buttons on ZTE UFi. If you want do more settings, you need log in the web page http://ufi.ztedevice.com or 192.168.0.1. Firstly, you need connect the WiFi from ZTE MF980 and enter WiFi key. When log in the web UI, the default password is admin. And there is PC and Mobile option per user preference. 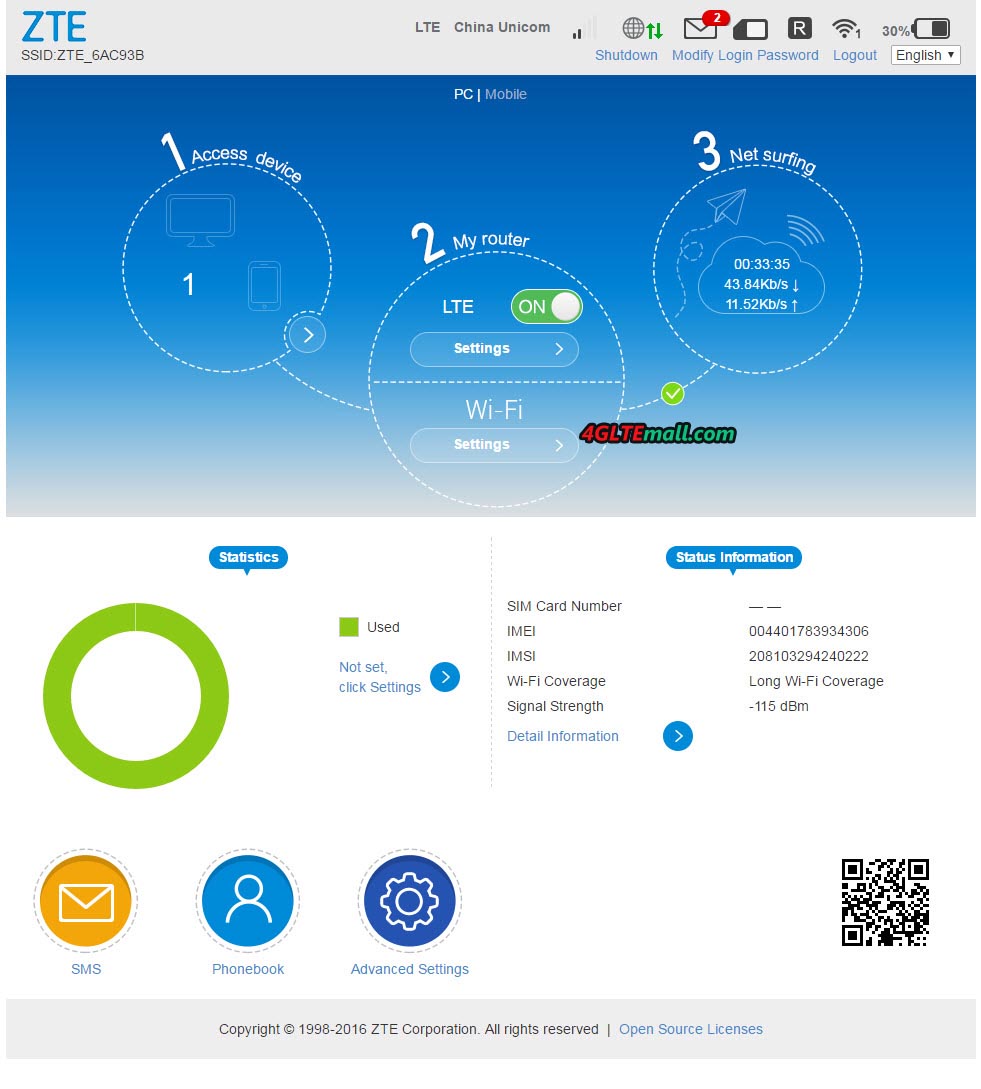 On the head of the web page, user can shutdown the device, modify login password and logout by one click. Two languages are available: English and Chinese. In the middle of the page, there is a switch button to on and off LTE connection. Below is the setting button to click and enter into the setting options. Users can setup the connection by adding new APN, select preferred network (four options: 4G only, 3G only, 2G only and Automatic). 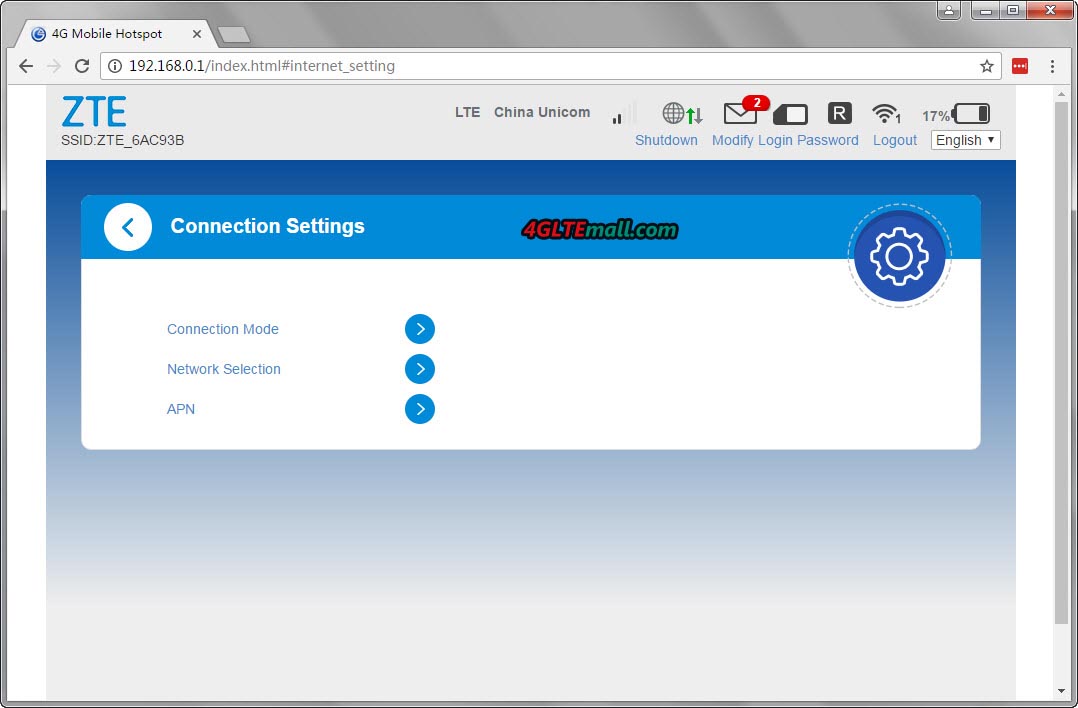 There are more options to setup the WiFi, user can setup the SSID name, security mode and password. If necessary, user can also enable the Guest SSID and WPS. In the WiFi advanced settings, user can select the WiFi band (2.4GHz and 5GHz available), Network mode (two options: 802.11b/g/n and 802.11 n only), Channel Bandwidth(20MHz/40MHz or 20MHz) and frequency channel. User can also select the country if necessary. 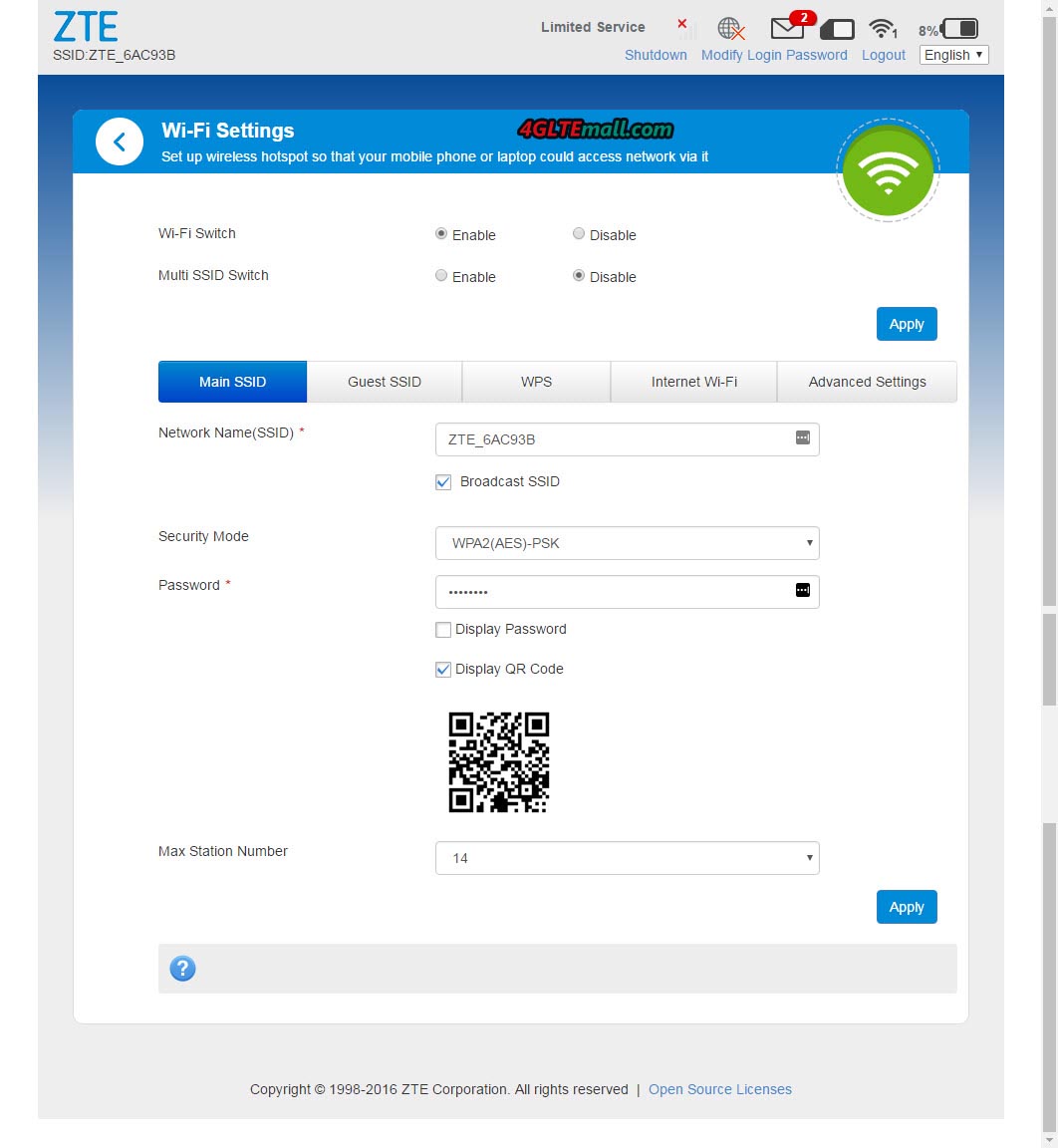 In the Advanced Settings, user can setup the power-save mode by choosing the WiFi coverage distance and WiFi Sleep time. And the router settings allow user to setup the IP address and DHCP. There are also options for firewall settings, such as Port filtering, Port mapping, UPnP and DMZ. User can also setup the firmware update check and reset or restart the router manually. 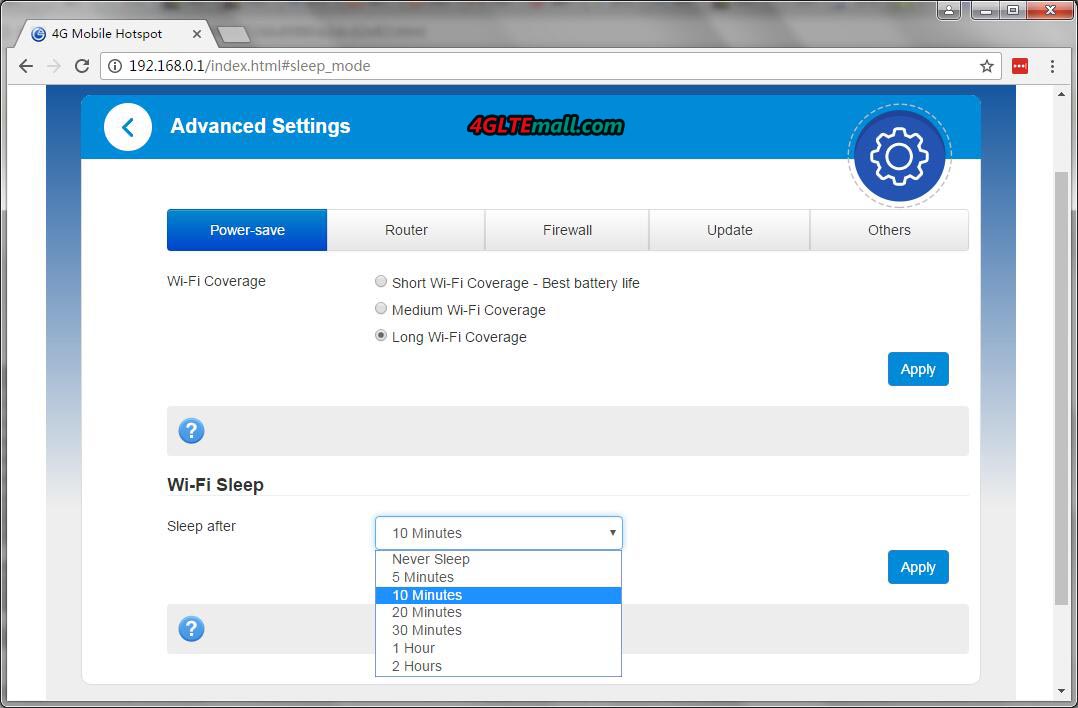 All setting for the ZTE MF980 UFI is very simple but important if you need them. User can also do the setting through the ZTELink APP, but has to install the APP in the smartphone first. We didn’t take the speed test this time, we will do the speed test by comparing it with the latest Netgear Nighthawk M1 MR1100 in following weeks and will provide full report after test. You can follow us for coming testing report.

We had known the model ZTE UFi MF970 4G Mobile Hotspot around the beginning of last year. It was first released by Chinese manufacturer ZTE almost at the same time like its competitor Huawei E5786. The Huawei E5786 was sold for one and a half year, but we still can’t get the ZTE UFi MF970 in the past year. Now we get the ZTE MF970 LTE Moible WiFi hotspot and we have the overview in this article. Actually, when we get the ZTE MF970, we are not quite sure which model it is, because there is no model number indication on the body of the device. The ZTE UFi MF970 is in white color, and touch feel is good in hand. There is “ZTE UFi” on the front of the device and there is a little screen in the middle of the UFi.

On the back of the MF970, there are only the logos for CE, ROHS and WiFi. No more information is showed about the model number, WiFi key word, SSID and IMEI number, which should be printed on a label with the device. On the top side of the ZTE MF970, there is a USB 2.0 interface and two connectors for external antenna. The connectors are covered by a small cap, if user want to connect the external antenna, the cap has to be opened. The small caps are still connected with the ZTE UFi body. At the low side of the body, there are power button, function button (“FUNC”) and the slot for SIM card. The back cover can’t be opened because the battery is built-in. And there is no slot for MicroSD card. The battery capacity of the ZTE UFi MF970 is 2300mAh, which can make the device keep working for 8 hours. It’s just like other 4G mobile hotspots, and is enough for normal use, if user want to extend the working time, mobile power bank may be necessary to charge the MF970 when power is low. ZTE UFi MF970 should be the first LTE category 6 mobile pocket router from ZTE to support LTE-advanced network. Its competitor Huawei E5786 is the first LTE Cat 6 pocket WiFi in the world. ZTE always follow the Huawei’s step to present its new products. The chipset of ZTE MF970 is Qualcomm MDM9230. Whether the processor Qualcomm MDM9230 is better or not than Huawei Hisilicon chipset, we haven’t taken such test. The ZTE MF970 could support up to 14 wireless devices to access internet through the WiFi, but Huawei E5786 could support maximum users only up to 10. But the most attractive feature for the two mobile hotspots is that they both support peak download speed to 300Mbps and upload speed to 50mbps.

After plugging the SIM card and power on the ZTE UFi, the device quick starts in seconds. There comes Vodafone logo in red and then the screen shows the network provider’s name, network signal, network mode, WiFi signal, battery status. Press the FUNC button and it comes the options, including the “Data Connection”, “Device info”, “WiFi QR code”, and options for “Global Roaming” and “Quick Boot”. The power button is “OK” button and the “FUNC” is for Next. Press power button(Ok) when on the “Device info”, we can see the information about device name(Vodafone R226-Z), SSID, WiFi key, phone number, web URL(http://vodafonemobile.wifi), and password(admin). We can also see other features when choose other options. User can do basic settings through the two buttons “FUNC” and power button. Just like the Huawei E5786, ZTE MF970 UFi also has two connectors for external antenna. If using the ZTE MF970 at the places with weak signal, it’s necessary to connect the external antenna. We had connected with the ZTE UFi from the smartphone, the surfing speed is good and stable. We will take a full test for the wireless connection next time. In all, the ZTE MF970 UFi is a good pocket WiFi router which supports the latest network technology and could achieve high speed network connection wirelessly. Multiple users could connect with the ZTE MF970 pocket router. The battery is enough for common use. If user want better signal in rural area, there is ports for external antenna. And Vodafone has introduced the ZTE UFi to its product range, it proves the quality of ZT MF970 is trustful.

If you don’t like ZTE brand, you can turn to Huawei E5786. And there is better model to recommend, such as Netgear Aircard 790s, Alcatel One Touch Y900. They all could support LTE advanced Cat6 networks.