Last year, Netgear offers one of the first mobile 5G routers: The Nighthawk M5. As the successor to the Nighthawk M2, the device with the model name MR5200 not only offers a fast cellular modem, but of course also a large battery, fast WiFi 6 and plenty of connections. 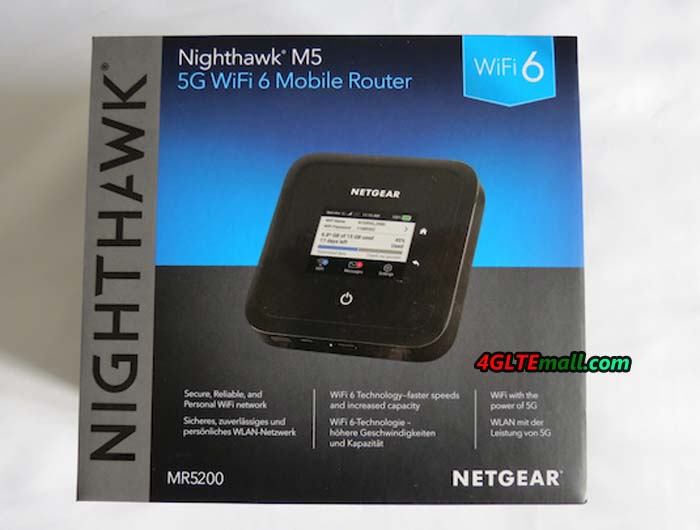 The Netgear Nighthawk M5 MR5200 is packed in a small cardboard box. In addition to the mobile 5G router, the package also includes a power supply unit with adapter for EU and UK plugs, a USB to USB-C cable and a battery with a capacity of 5,000 mAh. A quick start guide and a warranty card are also included.

At first glance, the Netgear Nighthawk M5 differs only slightly from the previous models Nightahwk M1 (MR1100) and Nighthawk M2 (MR2100). All devices have a cuboid design with a large display on the front, the connections are on the lower side. 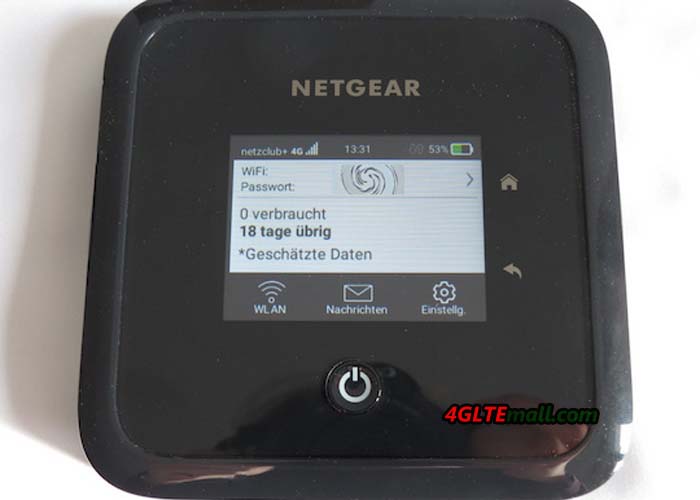 The Nighthawk M5 looks high-quality thanks to the rubberized and structured frame, and the matt back also leaves a positive impression. The front with the touchscreen and buttons is less successful, it has a high-gloss finish and magically attracts fingerprints and scratches. That was solved even better with the Nighthawk M1.

The back of the Nighthawk M5 can also be easily removed. Underneath is the battery and the slot for the SIM card. A welcome innovation compared to the previous models is the slot for the nano SIM card. The M1 and M2 still required micro-SIM cards, so that nano-SIM cards could only be used with an adapter. 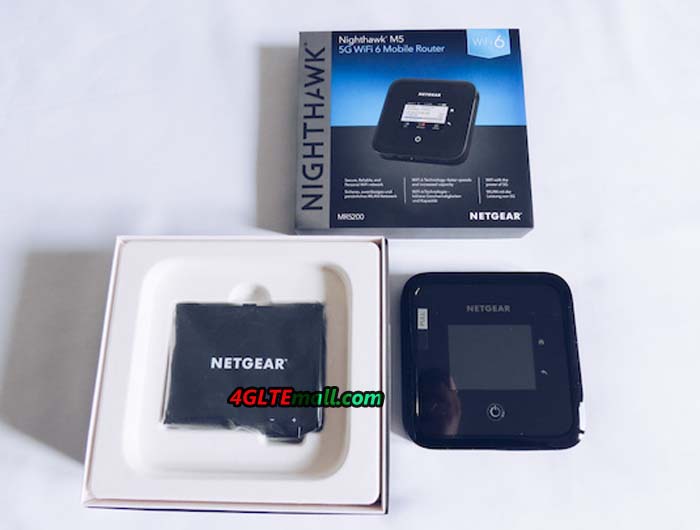 The main reason to buy the Netgear Nighthawk M5 is certainly the 5G modem. A Qualcomm Snapdragon X55 chip is installed. Theoretically, the 5G WiFi router can thus achieve speeds of more than one gigabit per second in the downlink and several hundred megabits per second in the uplink. In the practical test, the Nighthawk M5 was tested with a SIM card from Vodafone at several locations in the 5G network, both via LAN and WLAN.

Both the LAN connection and the WLAN represent a bottleneck for maximum Internet speed. The Nighthawk M5 allows a maximum of 1 GBit/s via RJ45 Ethernet, and up to 1.2 GBit/s (5 GHz band) is theoretically possible via WLAN. You should definitely be aware of this limitation. 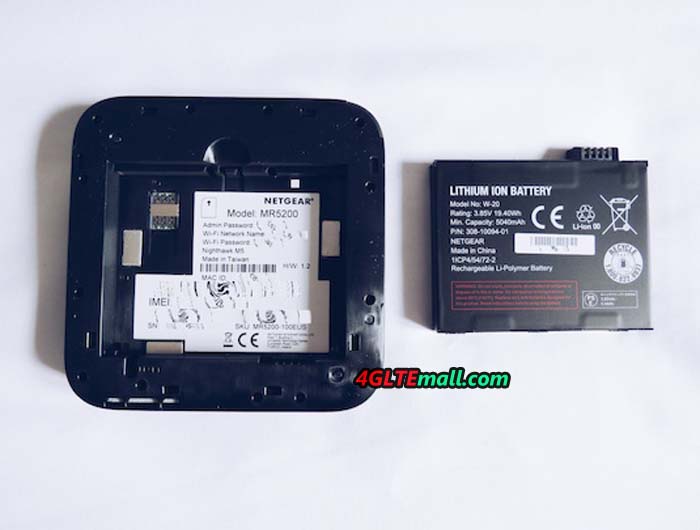 In the 5G network of Vodafone using the frequency range around 3.6 GHz (band n78), around 900 Mbit/s was measured for downloading and around 140 Mbit/s for uploading via LAN. If the connection was made via WLAN, around 800 Mbit/s were possible in the download. In a direct comparison with a measurement on the 5G smartphone, the Nighthawk M5 was slightly slower – around 950 Mbit/s were possible on the iPhone 12 mini under the same test conditions.

The 5G connections are naturally much slower when using dynamic spectrum sharing (DSS, band n1). Vodafone relies widely on 5G n1 with DSS, the Netgear Nighthawk M5 can use the technology without any problems and achieved speeds of up to 300 Mbit/s in the downlink and up to 130 Mbit/s in the uplink in the test. Incidentally, LTE was always a little bit faster at the same location in the downlink, but the uplink speed over 5G was almost twice as high as over LTE. Depending on the server, the latency times were well below 20 milliseconds and thus at a normal level. 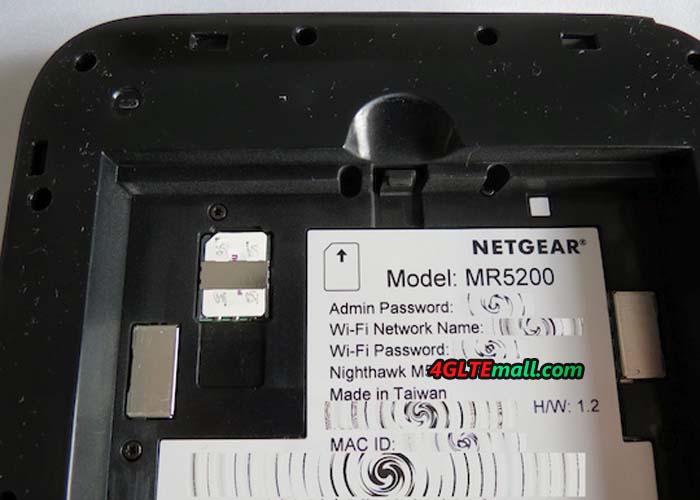 If necessary, you can also connect two external antennas to the Netgear Nighthawk M5 to improve reception quality and increase speeds. For this purpose, Netgear has installed two TS-9 connections on the underside, which are protected from contamination by a rubber cover as standard. If you need the 5G external antenna for Nighthawk M5, we recommend this one: https://www.4gltemall.com/5g-external-antenna.html . 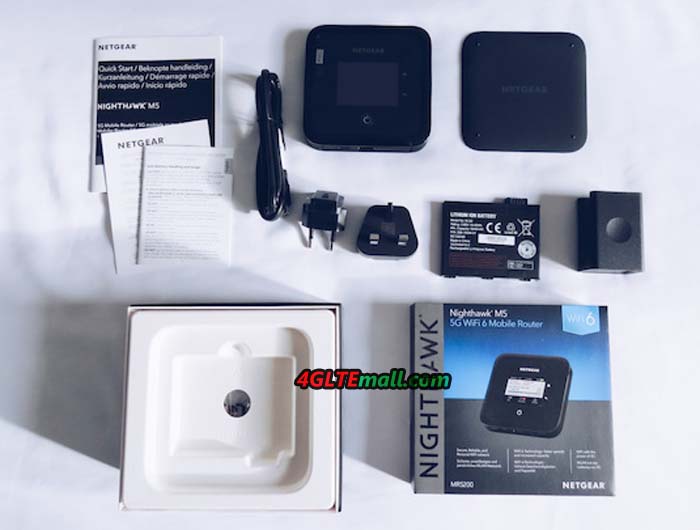 The Netgear Nighthawk M5 supplies up to 32 devices simultaneously with a WLAN connection. Thanks to the current WLAN 6 standard, speeds of up to 1200 Mbit/s gross in the 5 GHz frequency band and up to 600 Mbit/s in the 2.4 GHz frequency band can be used. However, the speed depends heavily on the device used and on other factors such as the distance. In the test, the speeds were usually significantly lower and fluctuated between 300 and 867 Mbit/s.

The WiFi range of the Netgear Nighthawk M5 turned out to be very decent in the test for a mobile router. An apartment with 80 to 100 m2 can easily be supplied with the small router, provided the walls are not super thick. If necessary, the range can also be reduced to save energy. Incidentally, there is no WLAN timer, but a guest network can be set up. The latest WPA3 encryption is also available on request. 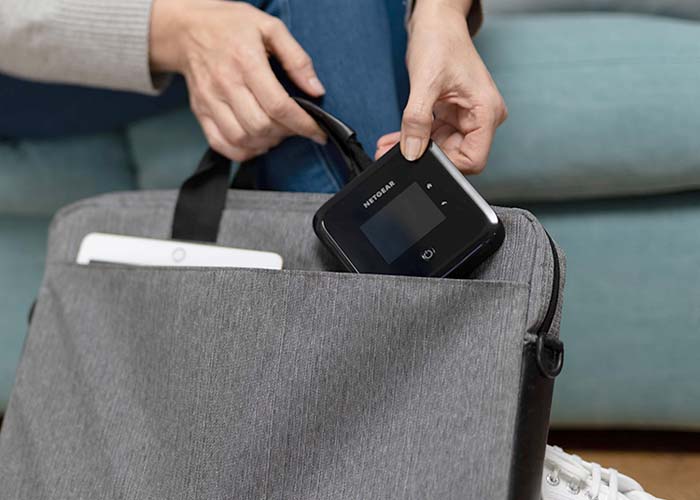 Internet via Ethernet and USB

As an alternative to the wireless connection via WLAN, the Netgear Nighthawk M5 can also share the Internet connection via LAN (RJ45 Ethernet) or via USB interface (“USB tethering”). Both types of cable connection are activated automatically, all you have to do is connect the cable and you are connected to the Internet.

The Nighthawk M5 can be configured so that the WLAN is automatically switched off as soon as a device is connected to the Internet via USB. The USB tethering function can also be deactivated if necessary, then the USB connection can only be used for power supply. 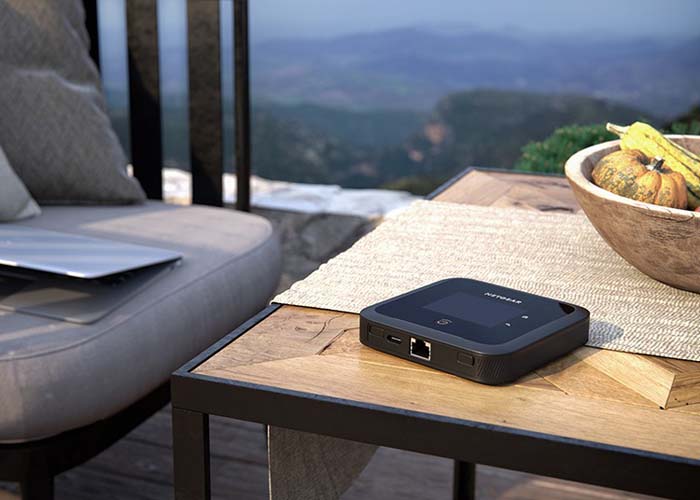 Most of the settings can be made directly via the touchscreen on the front of the Netgear Nighthawk M5. Here there is, for example, the possibility of changing the name and password of the WLAN, providing a WLAN guest network or changing the WLAN range. Further setting options concern, for example, the cellular connection (APN, preferred network technology, roaming, etc.). It is also possible to carry out a software update directly via the touchscreen.

The display itself is of poor quality compared to a current 5G smartphone, the resolution is low, the color representation is poor and the plastic cover is reflective. There is also not always a reaction to inputs.

A lock screen is shown on the display, showing the time and date. The network operator, the current network technology, the reception strength and the battery status (in percent) are also displayed. The actual start screen can be protected with a PIN if required; the WLAN data and the data volume used can be displayed here if required.

At the bottom of the start screen there are shortcuts for WiFi, SMS and settings. By the way, SMS can not only be received on the Netgear Nighthawk M5, but also sent.

Some information on the cellular connection can be viewed via the “Status” menu item. This includes, for example, the current network status, the technology used and the main frequency band, the reception strength (RSRP) and the IP addresses. Unfortunately, when the 5G (NSA) connection is active, there is no detailed information on the frequency bands; here, too, only the main radio cell (LTE anchor cell) is displayed, the network status signals “5GSUB6”.

The web interface reacts quickly and is clearly structured. The range of functions is basically good, but there is still a lot of potential for improvement in the details. For example, 5G and/or LTE can be deactivated if necessary. However, manual selection of the frequency bands is not possible. Detailed information on the frequency bands used by the Nighthawk M5 is also nowhere available, although this information would certainly be very interesting for some users.

The “NETGEAR Mobile” app is available for both Android and iOS and enables the Nighthawk M5 to be configured easily and clearly using a smartphone. All functions from the web interface can also be used via the app, for example the “data offloading” feature. The app responded quickly and reliably in the test on an Apple iPhone.

The 5,000 mAh battery of the Netgear Nighthawk M5 is easily exchangeable by the user, so if necessary, a second or third battery can be bought to swap instead of recharging on the go. The battery life in the test was around 8 hours with continuous 5G use (Internet radio stream via WLAN).

For longer stationary use, it can be advisable to remove the battery from the router and only operate the device directly on the power supply unit via a USB cable. This has the advantage that the heat development is significantly lower. In the test it happened that the Nighthawk M5 got very warm after intensive use (2 WLAN devices, streaming) and simultaneous charging of the battery.

The Netgear Nighthawk M5 made a good impression in the test. 5G modem and WLAN are very fast, there are many connections and operation are impressive. The Nighthawk M5 has to accept criticism, for example, for its weak LTE frequency band support. Even simple 5G smartphones allow better connections abroad than the Nighthawk M5, as they can use many more frequency ranges. There is also room for improvement in the software: some users will miss a timer function for the WLAN, others will miss more detailed information and setting options for the cellular connection.

If you really want to have 5G in your mobile router, you can hardly ignore the Nighthawk M5. If LTE is enough for you, you will find almost equivalent alternatives in the cheaper sister models Nighthawk M1 and Nighthawk M2.