More and more LTE advanced Pro devices are available in the market because most of the LTE-A pro devices are new, when the users try to buy one LTE advanced Pro gadgets for personal use, they may feel confused because they may not be familiar with the specs of the LTE devices. Netgear Nighthawk M1 and Huawei B618 are two latest new LTE Advanced Pro routers. Somebody may ask: what’s the difference between Huawei B618 and Nighthawk M1 LTE router? Which one is better to buy? We will take a comparison between the two LTE-A pro routers to find the answers for potential users. 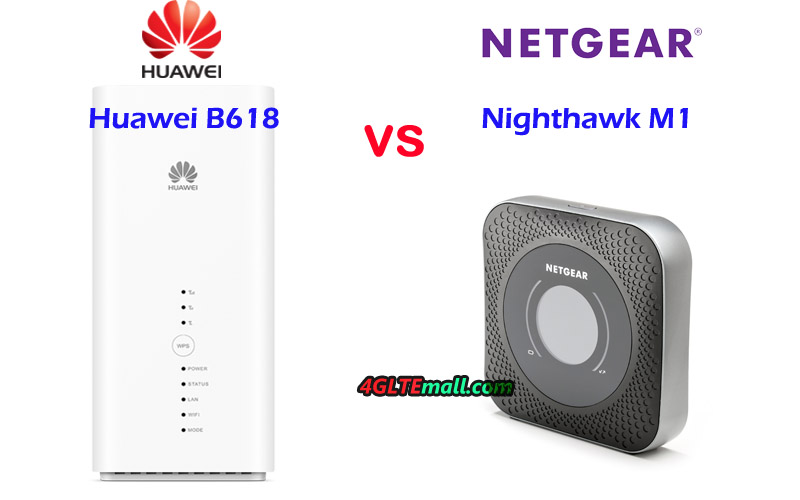 Huawei B618 VS Nighthawk M1 Appearance

If you are familiar with Netgear 4G Mobile WiFi routers, you may get to know Netgear Nighthawk M1 mobile hotspot router. As the upgraded model from Netgear AC810S mobile router, the Nighthawk LTE mobile hotspot router adopted a new design different from the predecessors in Aircard series. On the front, there is a 2.4-inch screen in round shape with two LED indicators to show the battery and signal status. It looks cool in black color and can be handed in one hand, but it’s thicker than a normal 4G pocket WiFi router. It’s a mobile WiFi router which can be taken outdoor and work on the go.

If you had used Huawei E5180 LTE Cube, you will not feel strange about the Huawei B618 Router design. Unlike a traditional 4G WiFi router, the Huawei B618 is in a shape of a cube and in white color. When it stands at your home, you may though it’s a kind of fashion furniture actually its function is a WiFi router with Ethernet port. The body of Huawei B618 is much larger than Nighthawk M1 but it’s stationary router without battery. It has to work with power adapter. 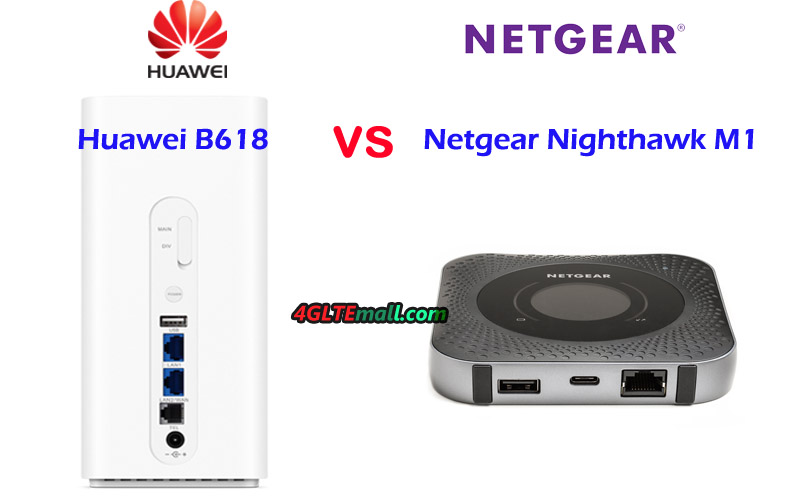 Huawei B618 VS Nighthawk M1 Interfaces

As a mobile WiFi router, the Nighthawk M1 mobile hotspot router could be used at home or for outdoor activities. In the display, it would show the connection status. The power button is on the top edge side while on the opposite side locates the USB ports and Ethernet port. It’s the world’s first LTE Advanced pro mobile hotspot with Ethernet port. The back cover could be opened and the battery is removable for exchange or inserting the SIM card. The SIM Card in Micro SIM size could be used.

Unlike the Nighthawk M1 router, the Huawei B618 has no display, on the front, there are few indicators for Signal strength, power, status, LAN, WiFi and mode. The WPS button is below the signal indicators. On the back, two connectors for external antennas are covered by a small cap and the power button is below the antenna connectors. Below the power button, there is one USB port and two Ethernet port & one Telephone port available. One of Ethernet ports is for LAN and the other is for both LAN & WAN. And the power plug is available for an adapter. Like the Huawei B525 modem, the SIM card slot is at the bottom with the reset button. 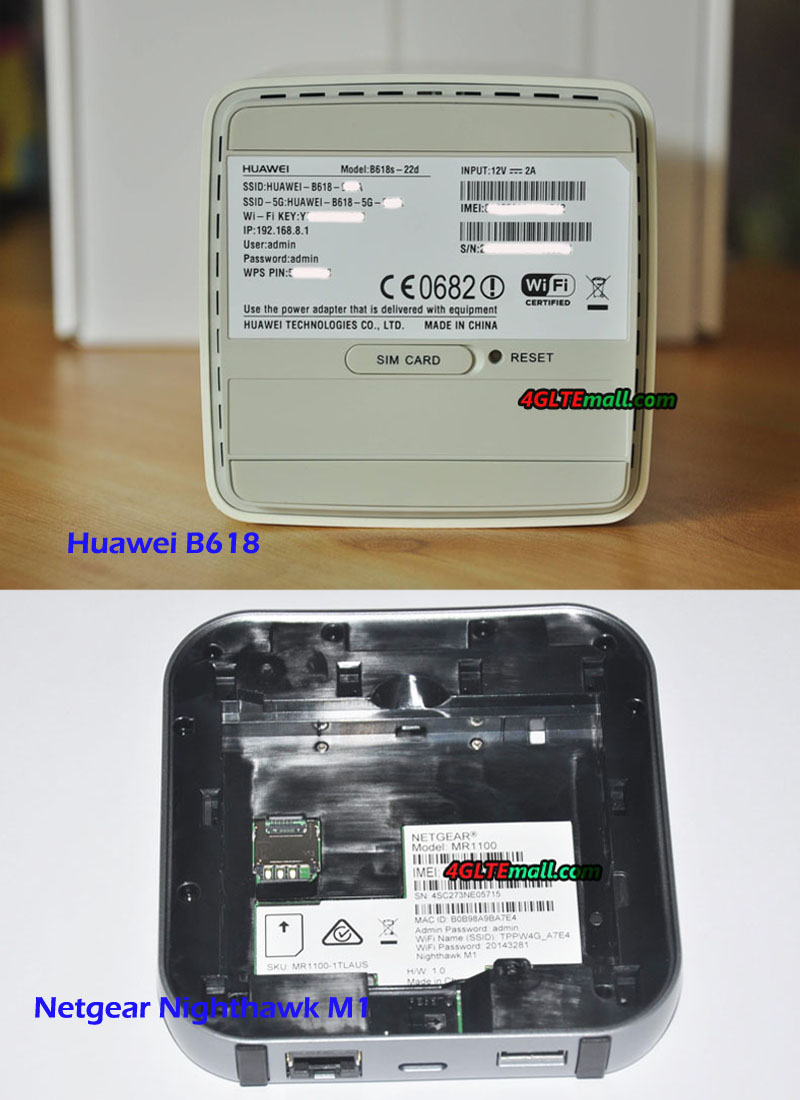 From the specs table, we can see that Netgear Nighthawk M1 Router is more advanced with the support of LTE Category 16, which could achieve downloads speed up to 1Gigibit/s. The Huawei B618 download speed is also very aggressive for up to 600Mbps with the support of LTE Cat.11. They both have two variant models for different network providers. The ATT Nighthawk M1 is mainly for North American areas while the Telstra Nighthawk M1 could be used in Australia, Asia, Europe and the Middle East, but may work only on 3G if travel to North Americans. The Huawei B618s-22d and B618s-65d cover the same areas as Telstra Nighthawk M1, but the different LTE bands are especially for some network providers.

Regarding the applications, the Nighthawk M1 Mobile Hotspot router has a removable battery which could let M1 work on the go and the large battery could provide the JumpBoost function to charge other devices like a mobile power bank. The Huawei B618 is mainly for indoor use at home or in office due to the limit of the power supply. And the size of Huawei B618 is inconvenient to take outside. As a stationary router, the Huawei B618 provides more practical functions for users. Many functions can’t be found in Nighthawk M1. Anyhow they both can be managed through the APP from a smartphone. It’s cool and user-friendly.

Regarding the price, the price of Nighthawk M1 and Huawei B618 are both at the high range now since they are latest new. As time goes, the price would be down but not expect too much. If you want to buy a Huawei B618 router or Nighthawk M1 mobile hotspot, consider your applications and the functions, and then make your decision. You will never get disappointed by the two LTE-A pro devices.