Many people know Alcatel 4G WiFi Hotspot, but few Alcatel 4G wireless router with Ethernet ports are well-known. Now Alcatel presented a new LinkHub series of wireless router for home use. The Alcatel LinkHub HH70 and HH40 are the two models for the home station. If you want to know the difference between LinkHub HH40 and HH70, you can check the specification table below for the comparison of the two 4G wireless wifi routers. 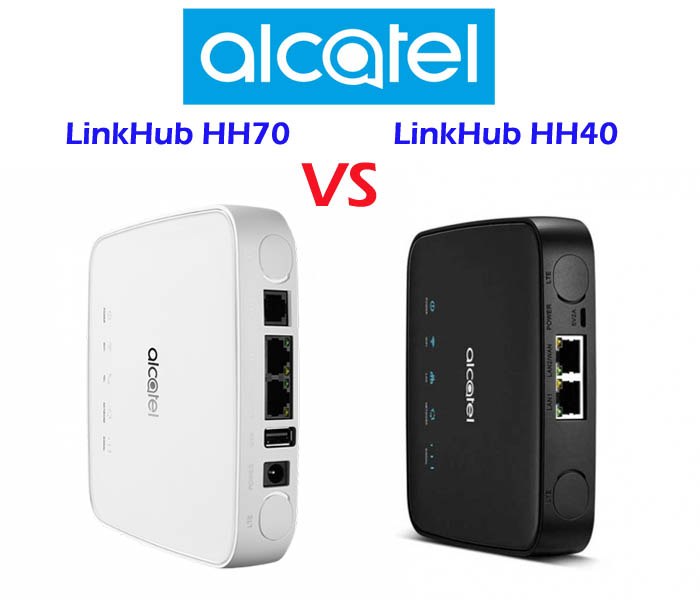 From the specs table, we can see the main difference focus on below point:

Variant models: LinkHub HH70 has only one variant model now, but Alcatel Linkhub HH40 has two models for different markets: Alcatel HH40V for EU and Alcatel HH40CM for APAC/MEA areas.

Interfaces: Comparing with Linkhub HH40, Alcatel LinkHub HH70 has an extra USB 2.0 port for external disk connection and printer, but it doesn’t has the Micro USB port which is available in LinkHub HH40.

The Alcatel Linkhub HH70 is advanced than HH40, so the Linkhub HH70 price is higher than HH40. If you would like to buy one home router from the two routers, we recommend the LinkHub HH70.

At the IFA 2018, Alcatel presented a new LTE wireless router for the Linkhub series. The new LTE router model number is Linkhub Cat7 HH70. The Linkhub HH70 is very similar to the predecessor model Linkhub HH40 in appearance, which we had introduced before (check Alcatel Linkhub HH40 review). But there is much difference in the new HH70 linkhub.

On the front, there is the Alcatel logo with five indicators for power, WiFi, telephone, network, and signal. The power button is on one edge side while the opposite side locates the power plug, one USB port, two Ethernet ports(one RJ45 for LAN/WAN and the other for LAN only), one RJ11 telephone port and two connectors for LTE antennas which are covered by two round cap.

The antenna connector type is SMA-female. If you would like to buy the external LTE antenna for Alcatel Linkhub HH70, you’d better buy the external antenna with SMA-male connectors. The WPS button is at another side. The Reset button and SIM card are hidden under a cover. The SIM card slot is for NANO-SIM card size. 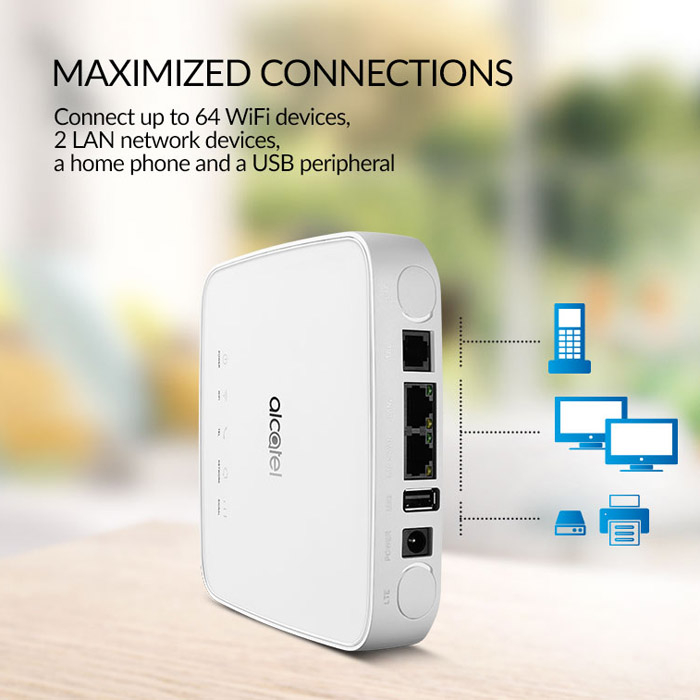 Upgrading from the Alcatel Linkhub HH40, Linkhub HH70 supports LTE cat7 which could achieve download speed up to 300Mbps and upload speed to 100Mbps based on Qualcomm MDM9240 chipset and 2CA carrier aggregation technology. And Linkhub Cat7 HH70 supports maximum WiFi users up to 64 devices while the HH40 supports only half to 32 devices.

The management and control of the Linkhub HH70 could be done via the Alcatel WiFi Link APP, which could also be used with Alcatel Linkhub HH40.

However, there is no integrated battery for mobile use in the Alcatel Linkhub HH70, but you can still operate the router via a corresponding power supply, for example, in the motorhome, in the car or in the house.