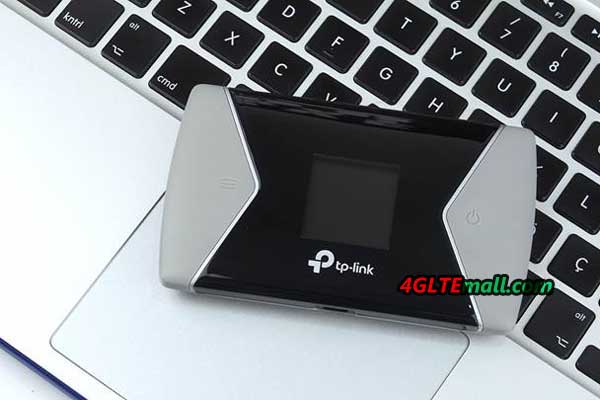 As the most advanced 4G mobile WiFi hotspot, TP-Link M7650 supports LTE Cat.11 with theoretically up to 600 MBit/s in the download and 50 MBit/s in the upload. Simultaneous surfing is possible with up to 32 devices, namely via dual-band WLAN IEEE802.11a/b/g/n/ac with theoretically up to 300 MBit/s on the 2.4 GHz and up to 867 MBit/s on the 5 GHz band. The 3000 mAh battery is designed to provide power for up to 15 hours of operation. A microSD card slot donates up to 32 GB of additional storage space, provided you plug in an additional memory card. The TP-Link M7650 router is controlled either via the display and two pushbuttons, via the tpMiFi app or a web interface. 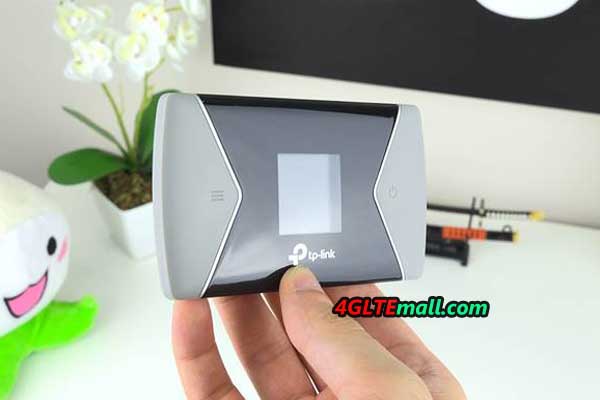 The TP-Link M7650 mobile WiFi is supplied in a blue metallic shiny cardboard packaging. The dimension is 6.7 x 1.6 x 11.2 cm and fits into the jeans pocket. The light gray case is slightly gummed, so the router does not slip easily out of hand. On the top there is a glossy black plastic surface around the display that magically attracts dust and fingerprints. At the left of this area is the menu button for the display, and the right of it is the power button, on a long narrow side the microUSB port for charging the battery. 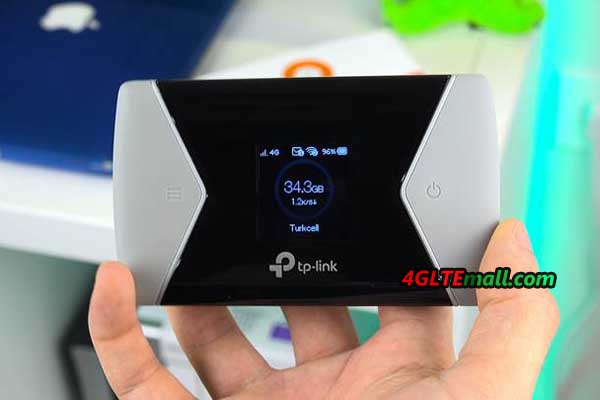 In the package, we found a USB cable, various short instructions and an adapter from Nano-SIM to Micro in addition to the 3000 mAh battery. In the TP-link M67650 router, users can insert a micro-SIM, with adapter for a nano-SIM, but if with an old mini SIM, the router cannot be operated. And TP-Link also provides a plug-in power supply for the router, which can be charged on the USB port.

After unpacking, you should first take a look inside the small LTE router and, if necessary, make a note of some details or take pictures with your mobile phone. Because the address and the password for the administration interface are located under the battery on the nameplate. And on the inside of the lid, the password for the Wi-Fi hotspot is printed, which is also required for use. The removal of the lid we found to be somewhat difficult, because you actually need long fingernails and some strength to reach into the notch of the lid on the device corner and then can lever up the lid. 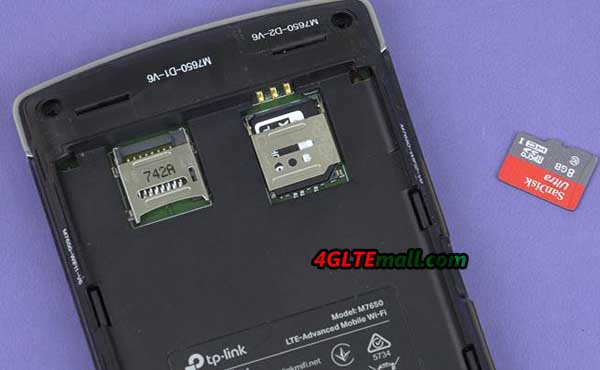 The micro-SIM slot reminded us a bit of old Nokia phones. First, the lock must be released and folded up. After inserting the SIM, the lock is folded down again and locked. If desired, a memory card can still be inserted, for the operation of the TP-link 4G router as an Internet access device that is of course not necessary. Now the battery is inserted, the lid is closed and the hotspot is switched on or the battery is charged first. 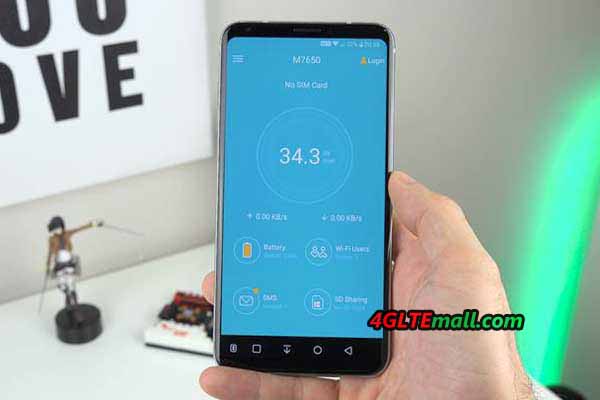 In our test, the TP-Link M7650 recognized our LTE SIM card within a few seconds and connected to the mobile network. The PIN query we had already disabled before inserting the SIM, if you do not do that, if necessary, enter the PIN. On the 1.44-inch display, the top left of the power indicator is showing the technology used (in our case 4G). In the middle above, the WLAN icon indicates how many devices are logged into the network. At the top right is the battery level, in the middle of the display is the already used data volume and below is the network operator. Now we could couple different devices via WLAN and surf. 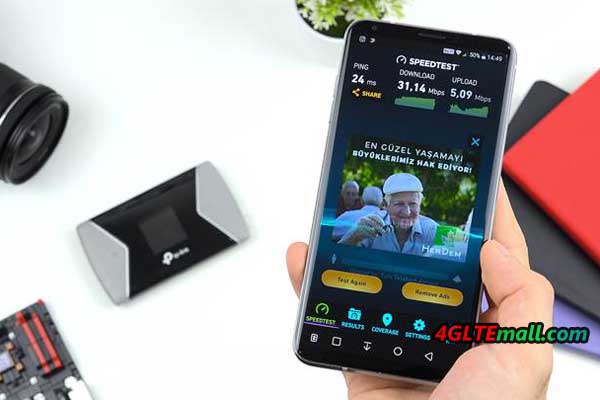 The TP-Link M7650 can be administered in three ways: Some of the settings can be changed via the display and the two pushbuttons. The menu is navigated by pressing the menu key several times. Under “Device Info” users can display the WLAN password in plain text. “Power Saving” allows to switch the energy saving mode on and off. “WPS” couples the router to compatible devices, and “Wifi Band” allows switching between 2.4 and 5 GHz bands. In “Network Mode” manual, switching between 3G and 4G is possible; 2G cannot be selected explicitly. “Data roaming” allows the use of the router in data roaming; by default this feature is disabled. 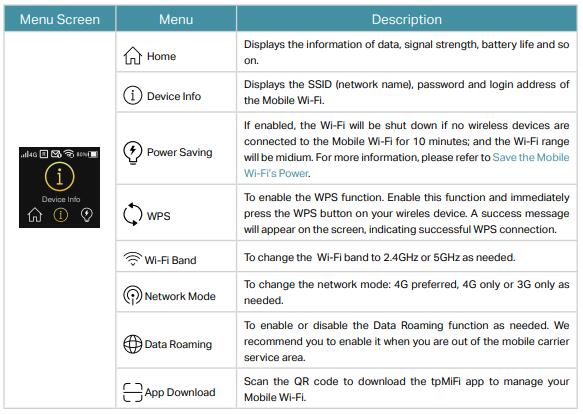 The web interface of the TP-Link M7650 router address http://tplinkmifi.net on a paired device, the default password is admin. The third administration option is the app tpMiFi, which is available for Android and iOS. Via the app or the web interface, more extensive settings can be made than via the pushbuttons and the display. For example, it can be turned off that the Wi-Fi password appears on the display. If the tariff allows it, SMS can be sent and received via the hotspot. In addition, the administrator can set a data limit that can be maximized. Unwanted WLAN clients can be locked out. 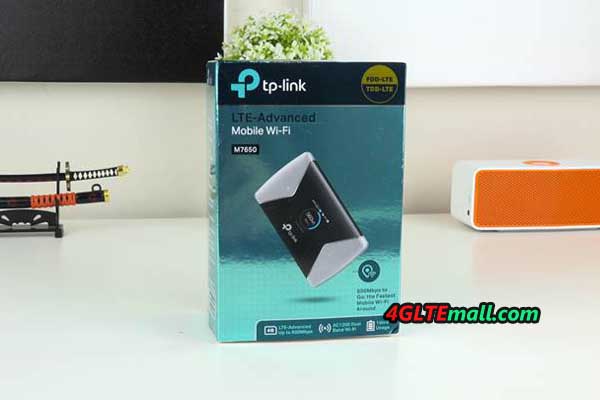 In the speed test, the TP-Link M7650 scored very well in our test measurements. We went to many places, where we knew that the mobile network reception is possible under almost optimal conditions. There, the TP-Link M7650 effortlessly managed to reach the maximum possible 50 Mbps downstream with our SIM card, even several times. For some test measurements, the value was even more than 60 Mbps downstream. The upstream, which is actually limited to 10 Mbit/s at our tariff, several times was even 12 Mbit/s. The ping was also very low with values of around 20 ms. 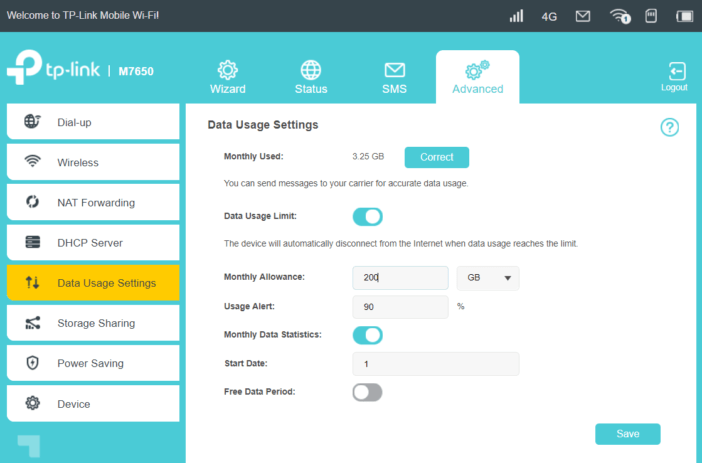 But even in poorly supplied areas, the router showed that it can “tickle out” the maximum available locally from the network. Stagnations or dropouts we did not notice. In normal operation, the TP-Link M7650 router should not be warm, but in the blazing sun you should not operate it for a long time, as this could damage the plastic body and the battery. 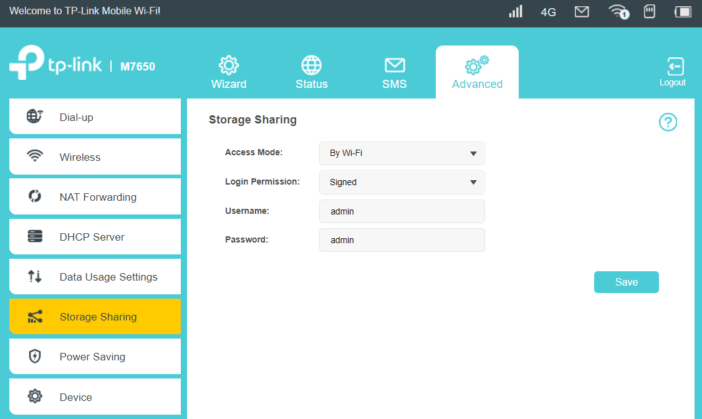 In terms of battery life, TP-Link promises that the M7650 Router can last around 15 hours on a single charge. In our experience, this value should be seen as the maximum value and ultimately it depends on the setting: If you turn off the power saving mode, the Wi-Fi hotspot is constantly on, and not only when a device requires a connection. Of course, this sucks on the battery as well as any additional wireless client that contacts the LTE router for synchronization or data traffic. Also, the operation in the car can “gnaw” at the battery capacity when the hotspot must “overcome” the metal shell of the car body to make contact with the mobile network and hold. 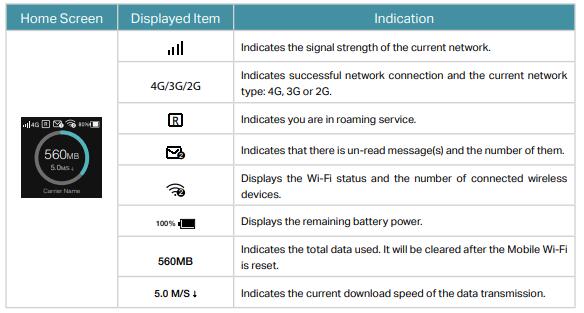 If the battery is fully charged, the energy-saving mode is switched on and about five to ten devices are connected to the M7650 hotspot, which is not more than ten meters away, the battery should in our estimation without problems last ten to twelve hours, so a whole working day. In a building, you can also operate the router permanently at the socket – the battery problem is in any case only in one operation on the road. 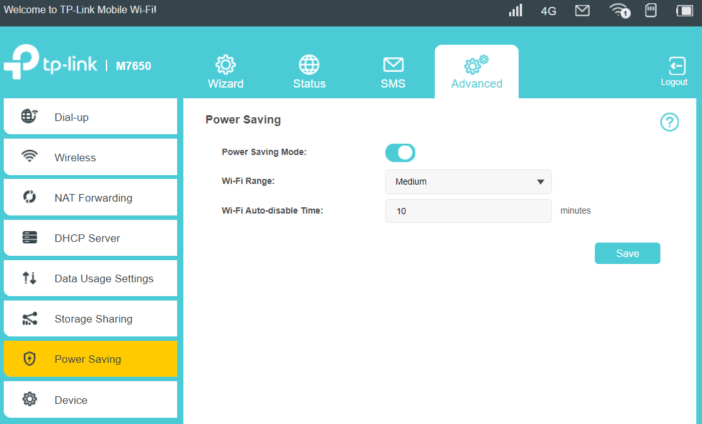 The TP-Link M7650 proves to be a portable and robust router in the test, which can be easily put into operation and administered. Depending on the mobile phone tariff used, fast surfing with up to 32 devices is possible. The battery lasts around ten to twelve hours. However, the LTE hotspot price is not a bargain and the quickly smeared plastic surface around the display is visually unattractive.

Actually, there are many options of Portable LTE router available which can provide even faster speed such as the Gigabit LTE router Netgear Nighthawk M1 and Huawei E5788. You’d better check more before making the buy decision.