HTC 5G Hub is an innovative device that combines the functions of a 5G WiFi router, a Android Tablet, and a multimedia speaker. The built-in high-capacity battery makes it easy to take HTC 5G Hub on the road and surf the Internet wherever you have a reliable 4G / 5G signal.

The HTC 5G router supports the 5G n78 standard, which occupies the frequency range of 3300–3800 MHz. The maximum speed of the HTC 5G Hub Internet connection in the fifth generation networks reaches 2.63 Gbps per reception, which is significantly higher than the available 4G speeds. 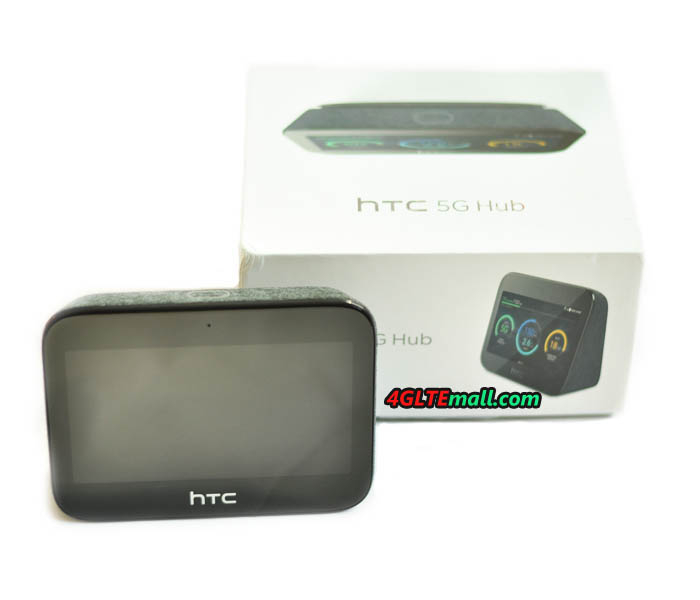 When working in 4G networks, the 5G router supports the LTE Band 3 and LTE Band 7 standards, which are used by all domestic operators. A wide range of operating frequencies allows HTC 5G Hub to operate not only in Asia, but also in other European countries.

The router is equipped with a slot for a Nano-SIM card and is not tied to a specific operator. The HTC 5G Hub can be freely used in the networks in Europe and Asia. 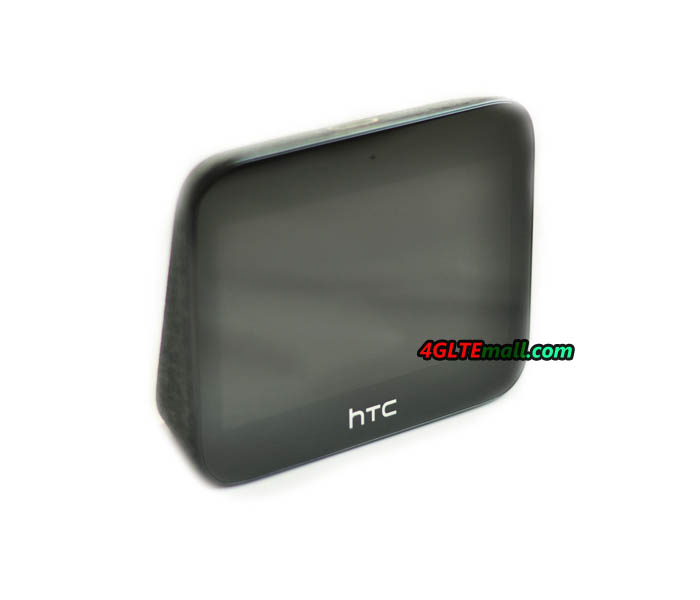 The router-hub runs on the Android 9 Pie operating system, which makes HTC 5G Hub similar to tablet computers and smart home devices. The high performance of the device is ensured by the use of an octa-core Qualcomm Snapdragon 855 processor and a modern 5G Snapdragon X50 5G modem.

HTC 5G Hub is equipped with a 5-inch high-definition touchscreen (1280×720), which allows you to not only configure the router, but also display graphics, play videos and launch various Android applications. Built-in dual speakers (90dB) play music, radio or other audio in high quality. The manufacturer declared support for broadcasting 4K video to an external screen (for example, your TV) and optimization for online games. VPN can be used to connect to a secure corporate environment. 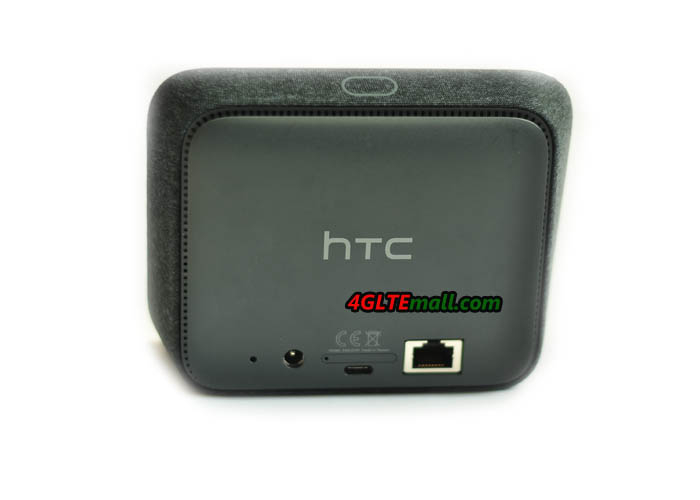 The high-speed WiFi module supports 802.11a/b/g/n/ac standards (2.4 and 5 GHz frequencies), as well as the rather rare 802.11ad standard (60 GHz frequencies). The Internet Center is designed for simultaneous operation with 20 wireless devices. Also, the router is equipped with a Bluetooth 5.0 module for connecting a wireless headset. 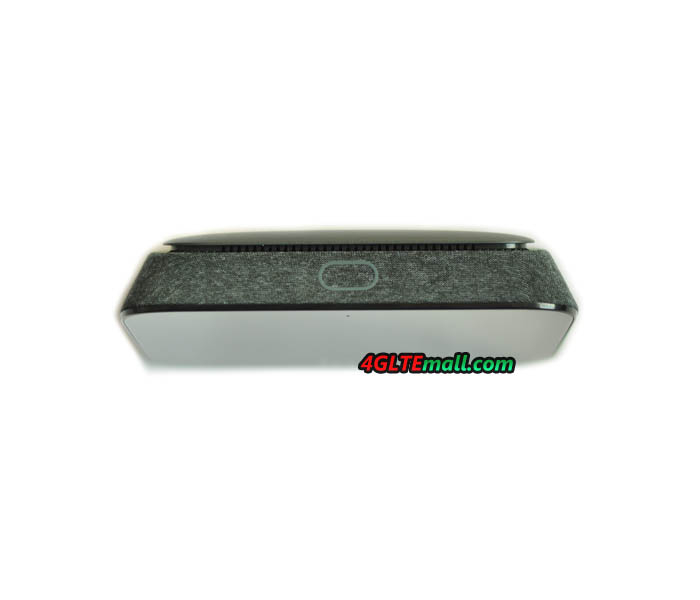 Autonomous operation of the router is ensured by the built-in 7660 mAh battery. Thus, HTC 5G Hub owners can freely take the device with them on the road and use it as a mobile router. According to the manufacturer, one battery charge should be enough for the whole day of intensive use of the router.

The advanced features of the 5G hub include a motion sensor and support for voice commands. When used with add-on software and an external display, the HTC 5G Hub can function as a game console, including cloud PC gaming. 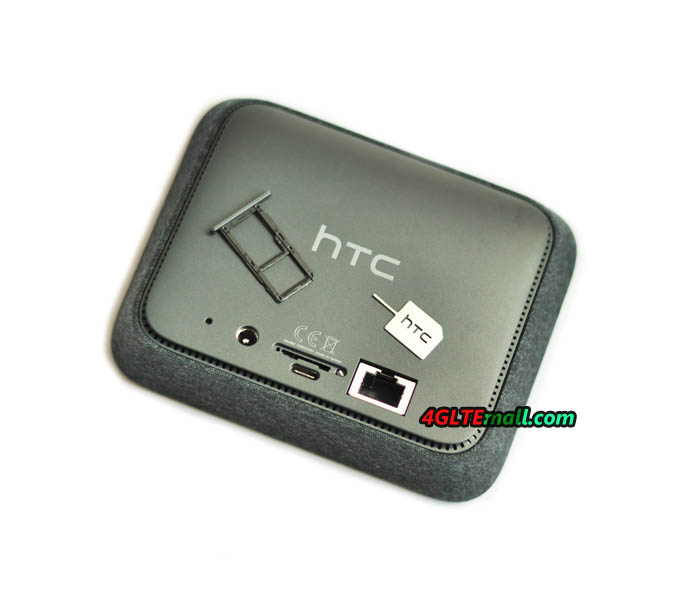 Due to its portability and light weight, HTC’s 5G router is perfect for home, office, car, or on vacation. The body of the HTC 5G Hub is made of soft-touch plastic. The ergonomics of the device are thought out to the smallest detail.

The HTC 5G Hub expands the capabilities of your mobile router by introducing a hub device that can replace your tablet PC, wireless speaker and voice assistant. In addition to creating a wireless network with access to the mobile Internet, HTC 5G Hub can be used as an independent gadget that does not require the connection of peripheral devices.

At the Mobile World Congress in Barcelona, HTC has presented a new 5G router, ​​not a new 5G smartphone, which is out of our expectation. The 5G router comes with Android user interface and is equipped with a huge screen. The 5G router chipset comes from Qualcomm. 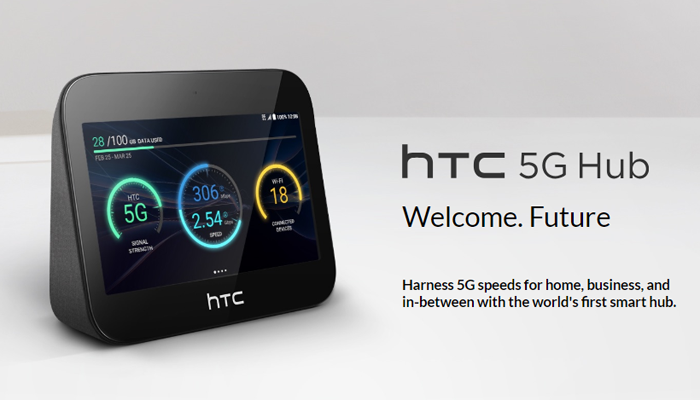 The HTC 5G Hub is equipped with a 5 inch touch screen on the front. The resolution is quite rough with 1280 x 720 pixels, but for a router such a huge screen is still almost oversized anyway. HTC promises that the 5G router is with Android 9 operating system, and can also stream movies. The output can also be made via the built-in USB-C port on the back of a TV, so you do not necessarily rely on the screen on the router. With the microSD card slot, you can also play your own content such as photos and videos on the 5G hub. 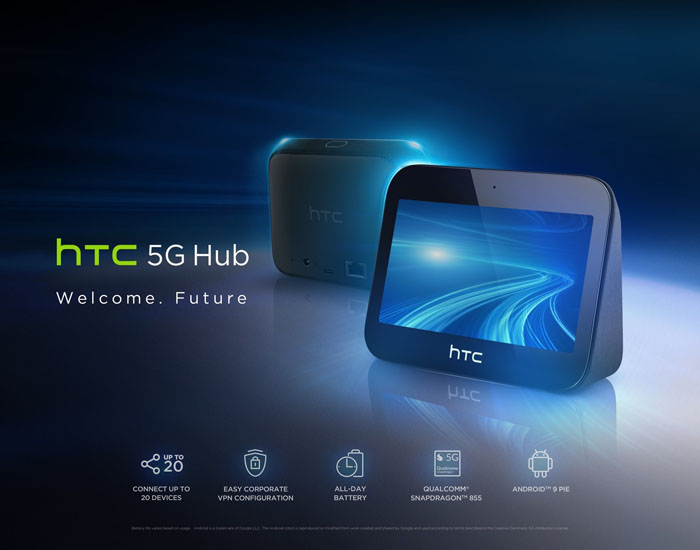 The integrated modem comes from Qualcomm, it is the model Snapdragon X50v2. The processor uses a Snapdragon 855 with 4 GB of RAM. The internal memory of the 5G Hub is 32 GB, which is sufficient for the operating system and some apps. In addition to the USB Type C connector, there is also a RJ45 Gigabit LAN connector and a connector for a power supply. However, there is no connector for external antennas, so External antennas cannot be connected.

Wi-Fi is supported on both 2.4GHz and 5GHz. In addition to the current WLAN ac standard, the upcoming WLAN ad / WLAN 6 standard is also supported.

The HTC 5G Hub can use 5G both in the mmWave frequency range between 26 and 28 GHz and in the C-band frequency range between 3.4 and 3.8 GHz. The C-band, also known as band n78, will be available in Europe. Whether the HTC 5g router also supports older mobile radio standards such as LTE and UMTS, is so far unclear. Since with the Snapdragon 855 a suitable modem is installed, but can be assumed.

HTC brings the 5G Hub in cooperation with various network operators on the market, among other things, the 5G router is also offered in Germany at Telekom. When and at what price is still unknown. Other providers of the HTC 5G Hub are Elisa (Finland), Sunrise (Switzerland), Three (England), Telstra (Australia) and Sprint (USA). At Sprint, the 5G Hub will be available in the second quarter of 2019.