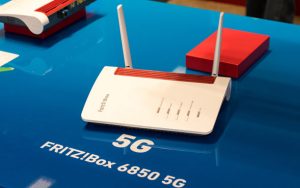 Gigabit speed over LTE and 5G

The following frequency bands are supported according to AVM:

The AVM FRITZ! Box 6850 5G is technically very similar to the FRITZ! Box 6850 LTE and the FRITZ! Box 7530. Both the shape of the housing and the technical data are almost identical. On the back there are two SMA connections for an external cellular antenna as well as four Gigabit LAN ports (RJ45) and a USB 3.0 interface. If you will buy the external 5G antenna for FRITZ! Box 6850 5G, we recommend this one: https://www.4gltemall.com/5g-external-antenna.html .

The FRITZ! Box 6850 5G is one of the world’s first 5G routers with an integrated telephone system and DECT function. There is also a TAE / RJ11 interface for an analog telephone.

The AVM 5G Router supports WLAN on both 2.4 GHz and 5 GHz, the maximum speed is 866 Mbit/s in the 5 GHz band. Unfortunately, the new WiFi 6 standard is not supported.

The AVM FRITZ! Box 6850 5G should appear in summer 2021, there is no price yet. As soon as it is available, the device will be tested.