There are many 4G Mobile WLAN routers available in the market now, but most of them have some application limit due to the network incompatibility if moving to another particular continent. Here we get a new gadget that provides a perfect solution for this trouble. The GlockalMe provides the G3 hotspot not only with the support of multiple frequency bands but also directly offers an integrated CloudSIM service that enables worldwide LTE usage at astonishingly fair prices. 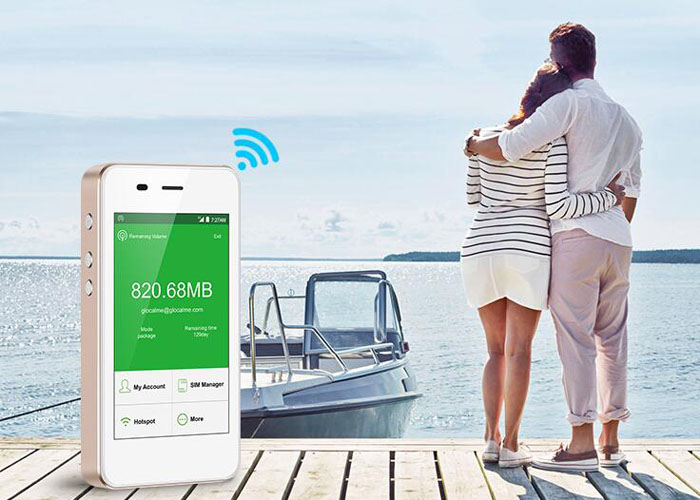 The GlocalMe G3 is the most powerful mobile WLAN hotspot from the Chinese provider. The device looks like a very thick Apple iPhone 4, runs with a highly customized version of the Android operating system and comes with a very large touchscreen display(for a hotspot) therefore. In terms of price, the GlocalMe G3 is reasonably priced at around 199 USD, especially since 1.1 GB of data usable worldwide is already included in the purchase price.

In addition to the device itself, only one USB to MicroUSB charging cable is included. There is no power adapter, but you can use any ordinary power supply with the USB port. The GlocalMe G3 hotspot looks incredibly thick at first glance because there is a very strong battery with 5,350 mAh capacity. On the side of the device, there are two buttons for louder/quieter (whose functionality is unclear) and a power button. Processing, materials and the SIM card slot always make a decent impression. 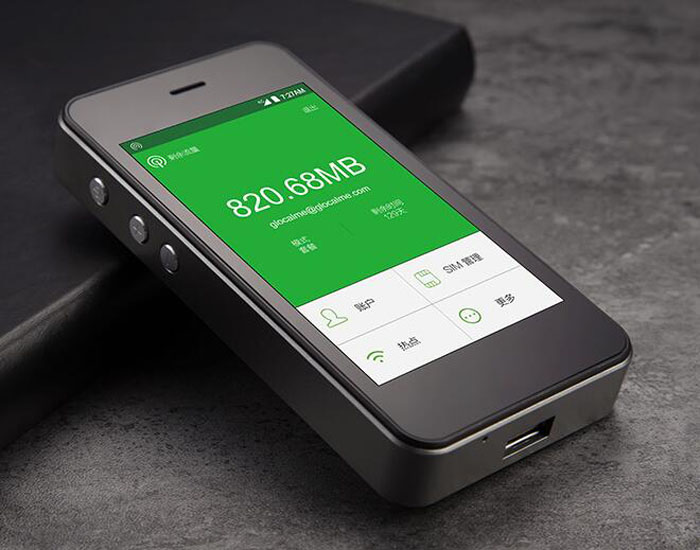 The GlocalMe G3 is dual-SIM capable, and it has two nano SIM slots. This is a unique selling proposition for Mobile WLAN Hotspots and can be very convenient in many situations. In the test, the GlocalME G3 was working quickly and simply with Vodafone and Orange SIM cards: after a short press on the power button, it took only about half a minute for the router to be online. A quick-access menu allows you to easily switch between the two SIM cards and the virtual SIM card.

The operation is very easy and is done via the GlockalMe G3 touchscreen. By using the Android operating system you have the advantage of a “full-featured” keyboard, for example, to be able to change the WLAN name and the WLAN password. The display itself is of poor quality in terms of brightness, resolution and viewing angle stability in comparison with current smartphones, but for a mobile Wi-Fi hotspot, it is of course quite sufficient. 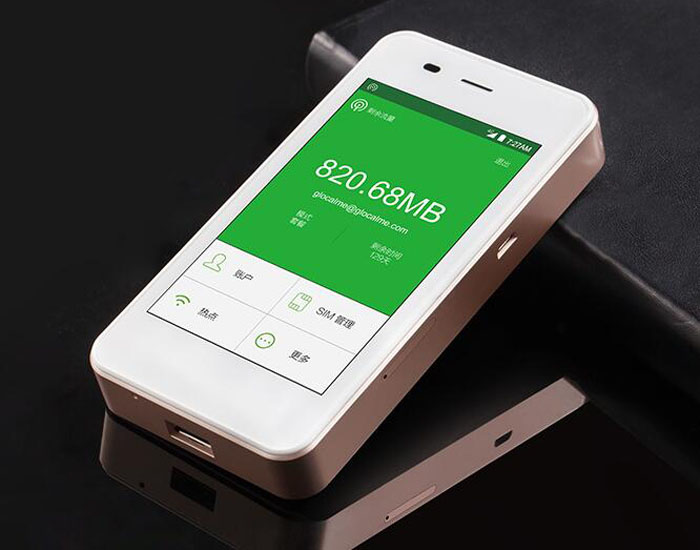 GlocalMe G3: CloudSIM in the test

The main highlight for the purchase of the GlocalMe G3 is probably the virtual SIM (CloudSIM), which allows the easy worldwide use of the device in addition to the dual SIM function. 1.1 gigabytes of the data volume is already included in the purchase; additional volume can be purchased if you create an account. All this can be done either via an app (for iOS and Android) or via the GlocalMe website.

GlocalMe offers the data volume in the form of various data packages. These are valid for different lengths of time (for example 30 days, 90 days or 365 days) and are available for different countries and continents. The prices seem surprisingly fair at first glance, so costs 1 GB world-wide data volume for 1 year € 29.90. If you only need data in Germany, you can buy eg 3 GB for 19 Euro or 1 GB for 7 Euro (each valid for 30 days). 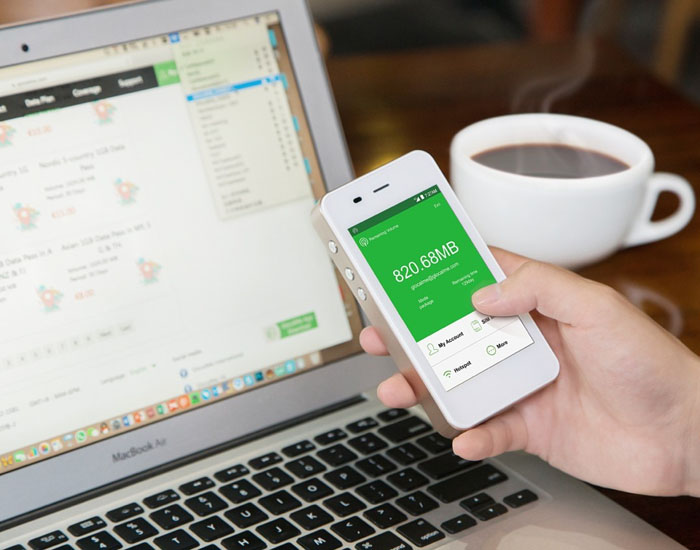 In the test, the virtual SIM card was tried in Germany, the service worked easily and in the LTE network data rates up to about 25 MBit/s were measured in the download. The latencies (ping) were about 30 milliseconds and in the uplink about 5 Mbit/s were reached. These are not top scores, but for surfing and streaming HD videos, it is absolutely fine.

The speed test with the local SIM gave the GlocalMe G3 router a very bad picture. In LTE mode, a maximum of 35 MBit/s was possible via WLAN, in UMTS mode it was over at about 24 MBit/s. For comparison: under identical test conditions, an Apple iPhone 8 managed about 140 MBit/s in the downlink and about 68 MBit/s in the uplink via LTE, similar values were also provided by the Netgear AirCard 810 hotspot. 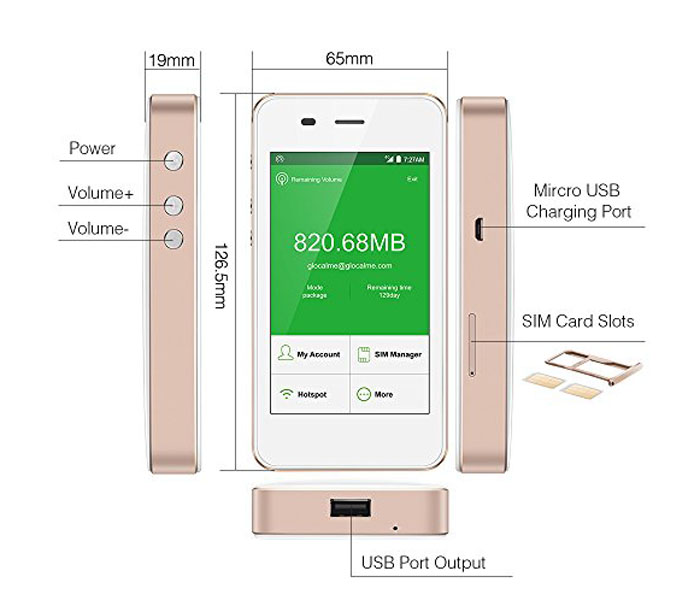 The WLAN of the GlocalMe G3 is comparatively slow, according to the official specs, only the 802.11b/g/n standard on 2.4 GHz with a maximum of 72 MBit/s downlink is supported, but 5 GHz is not available. For comparison, other mobile hotspots in the price range usually offer dual-band WLAN with at least 300 MBit/s.

The battery provided an operating time of about 20 hours in the test, which is a very good value for a mobile Wi-Fi hotspot. If required, you can also charge other devices such as a smartphone via the full-size USB port, the GlocalMe G3 then becomes a power bank.

Unlike most other mobile Wi-Fi hotspots, the GlocalMe G3 lacks many features. There are no connections for an external antenna, no MicroSD memory card slot, no RJ45 LAN connection and also a web interface, as it is usually known from mobile WLAN routers, is not present on the GlocalMe G3.

The software is extremely limited, many other usual settings such as a “LTE only” or “3G only” mode do not exist. Statistics on data consumption and information on the network used are only very limited visibility when using a local SIM. That does not necessarily have to be bad for the end customer – the GlocalMe G3 works well and does its job. However, this fact must be mentioned in this review and it would be nice if a possible successor would offer more configuration options. 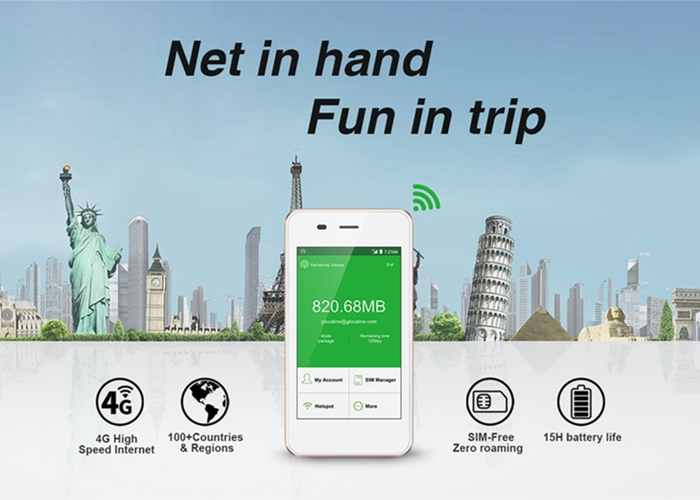 The GlocalMe G3 is a very interesting mobile wireless router. Anyone who travels a lot in the world and often travels to different countries should take a closer look at the device. The prices for mobile data use with the virtual SIM card are very competitive, so that in most countries, the purchase of a national SIM card can be omitted. Also for the ease of use and the very good battery life, the GlocalMe G3 deserves praise.

For technology enthusiasts and those who value good technical equipment, the device is quite uninteresting. Although the many supported LTE frequency ranges, as well as the dual-SIM function, are to be positively emphasized, the comparably slow modem, the weak WLAN, and the few setting provide not a good impression. To summary, the GlocalMe G3 is a highly recommended hotspot with many unique selling points.